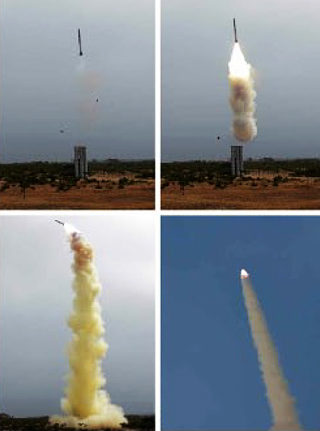 This was the first time Pyongyang publicly revealed a test-firing of what is believed to be its new KN-06 missile system, which was first revealed five years ago.

Kim reportedly guided the test of this domestically developed system and the state-run Rodong Sinmun released a series of photographs Saturday showing the bespectacled leader in smiles observing its launch.

The KN-06, with a range of up to 150 kilometers (93 miles) and equipped with radar target tracking, is seen by the South Korean military as an equivalent to its Patriot interceptor missile system.

The test-fire indicated that a cold vertical launch system was applied, a technology which can be found in submarine-launched ballistic missiles (SLBM).

The KN-06 was first revealed by North Korea during a military parade celebrating the 65th anniversary of the founding of its Workers’ Party in October 2010 and seemed to be similar to the Russian S-300 surface-to-air missile system.

Analysts expect it to be deployed around Pyongyang to deter South Korean fighter jet attacks.

The South Korean Joint Chiefs of Staff said Friday that the North fired a short-range surface-to-air missile into the sea around 12:45 p.m. on Friday from South Hamgyong.

The government also said that Pyongyang was jamming the global positioning system (GPS) of planes and vessels in the South.

These latest provocations came as President Park Geun-hye met and discussed with leaders of the United States, China and Japan ways to deter the North Korean nuclear threat on the sidelines of a nuclear security summit in Washington.

North Korean ambassador to the United Nations So Se-pyong told Reuters in Geneva Friday that Pyongyang has to come up with “countermeasures” if the United States continues military exercise with South Korea. He said, “We have to develop and we have to make more deterrence, nuclear deterrence.”

North Korea has fired short-range missiles, mid-range missiles and multiple-rocket launchers in the past few weeks, in defiance of the UN Security Council’s strongest-ever sanctions and the largest annual Seoul-Washington joint military drills in history, initiated after the North’s fourth nuclear test on Jan. 6 and its long-range missile test on Feb. 7.