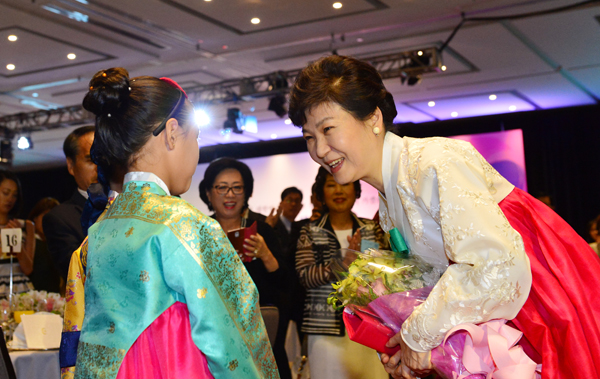 President Park Geun-hye talks to a girl after receiving a bouquet of flowers at a meeting with Korean expats living in Mexico on Saturday at the Intercontinental Hotel in Mexico City on the second stop of her foreign tour. [JOINT PRESS CORPS]

The 2016 Nuclear Security Summit brought global leaders to the U.S. capital city amid growing concerns over nuclear terrorism. The event started with a reception and welcome dinner on Thursday and discussion sessions on Friday.

At a working luncheon on Friday, Park said world leaders made significant progress to realize a world without nuclear weapons over the past six years. The Nuclear Security Summit, initiated by U.S. President Barack Obama, had its first event in 2010. South Korea hosted the second round of the biannual conference in 2012 and the third took place in The Hague in 2014. This year’s was the fourth and final summit and leaders from 52 countries and four international organizations attended it.

In her remarks at the luncheon, Park said the United Nations should contribute to the development of a nuclear security regime by collecting various opinions from the international community. She said the International Atomic Energy Agency (IAEA), the UN-led nuclear watchdog, has the ability to play a pivotal role by creating standards, monitoring their implementation and providing support to each country.

“As the chair country of the IAEA’s ministerial-level international conference on nuclear security, scheduled for December, Korea will ensure that the IAEA play a key role in the nuclear security regime,” Park said. Seoul also plans to “assist IAEA activities with a focus on coming up with measures to cope with the threat of cyber attacks,” she said.

Over the past few years, South Korea has suffered cyberattacks on the state-run nuclear power operator, which runs 22 reactors around the country. North Korea was suspected to be behind them.

Park also proposed that a conference should take every five years to check on the progress of nuclear security.

Concluding her remarks, Park said a global nuclear security regime should be left to the next generation as a lasting legacy. “I hope this conference will serve as historic starting point to this end,” Park said.

Park spent Thursday on diplomatic efforts to resolve the nuclear crisis on the Korean Peninsula. She held a series of bilateral and trilateral summits with U.S., Chinese and Japanese leaders Thursday, before she began the official schedule for the Nuclear Security Summit.

During Thursday’s working dinner, Park gave a three-minute speech to address the North Korea issue. “My belief stands firm that a world without nuclear weapons must start from the Korean Peninsula,” Park said. “Denuclearization of the North is a prerequisite for nuclear security of not only the Korean Peninsula and Northeast Asia, but the entire international community.”

Despite global leaders’ efforts to realize a world without nuclear weapons, North Korea has defied the trend and directly challenged the efforts of the international community, Park said. She said the country has produced and stockpiled weapons-grade nuclear materials for more than 20 years in violation of all international regulations on nuclear safety.

“Since the North stopped the IAEA’s access to its nuclear facility in 2009, the international community has been left with almost no information on the North’s nuclear materials production, stockpile and management,” Park said. “Taking into account the North’s history of cyberattacks and drone infiltration attempts, we cannot rule out the possibility that it will abuse the new technologies to attack our nuclear facilities.”

Park urged world leaders to send a strong message to the North by implementing economic sanctions in order to change the North’s thinking and force it to give up its nuclear programs.

Meanwhile, Obama criticized Republican presidential frontrunner Donald Trump for recent comments that South Korea and Japan should be allowed to build their own nuclear arms.

During a closing news conference of the Nuclear Security Summit on Friday, Obama said world leaders had expressed concerns about Trump’s argument in private conversations with him at the summit.

“Even those countries that are used to a carnival atmosphere in their own politics want sobriety and clarity when it comes to U.S. elections because they understand that the president of the United States needs to know what’s going on around the world,” Obama said.

“The person who made the statements doesn’t know much about foreign policy or nuclear policy or the Korean peninsula, or the world in general,” Obama said.

Park arrived in Mexico on Saturday for the second segment of her trip. At a dinner with the Korean community in a hotel in a Mexico City, her first official event in the country, she said that if Pyongyang does not give up its path of nuclear provocations despite warnings from the international community, it would lead to its “further isolation and self-destruction.”

She will meet President Enrique Pena Nieto on Monday to talk about a wide range of economic projects. The Blue House said 145 Korean businessmen from 144 companies will visit Mexico with Park.