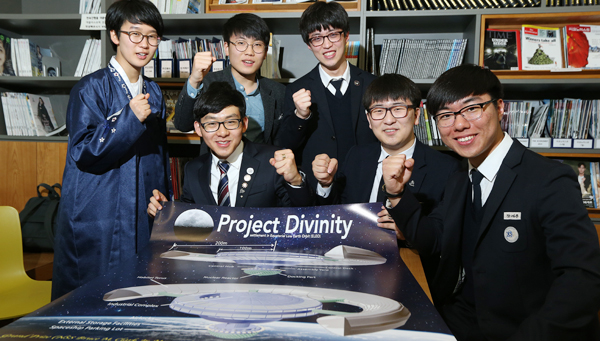 Team Divinity pose after winning the Grand Prize at NASA Ames Space Settlement Contest this year. It was the first time a Korean team won the Grand Prize since the contest began in 1994. [OH JONG-TAEK]

A team of high school students from Korea won the top prize in a NASA contest to design a settlement for 10,000 humans in space.

The NASA Ames Space Settlement Contest is an international contest for students up to grade 12 and has been hosted annually from 1994 by NASA Ames Research Center, San Jose State University and the National Space Society.

Students can enter individually, as a small team of two to five, or as a large team of six or more, which are judged separately. The contest awards first, second and third prizes by age groups, but the grand prize is awarded to the best entry regardless of the contestants’ age.

The contestants submit a written report detailing how 10,000 people can live in a space settlement.

“It was difficult to prove every section of our space settlement blueprint with scientific theories,” said Kim Kang-san, leader of Project Divinity.

Project Divinity’s solution was somewhat different from former Grand Prize winners because it was set in a 500-kilometer (310-mile) orbit above the Earth’s equator.

“Former projects were set in the Lagranian point, without any gravity, but our space settlement’s proximity to Earth minimizes space radiation,” said Kim Dong-hyun.

“People living in the settlement will feel much more grounded, too, because they can physically see the Earth up close,” said Doh Seung-hyeon.

The biggest challenge for all contestants was how to economically provide oxygen and water to the settlement because transporting them from the Earth is not a sustainable option, both economically and resource-wise.

“We proved that supplying water and oxygen by melting ice from nearby asteroids would be a more affordable option,” said Jang Jae-hun. Ice and rare elements like platinum can be found on asteroids in the solar system.

Quidditch is an imaginary sport originating in J.K. Rowling’s Harry Potter series of books that requires mounting a broom to fly. Project Divinity detailed how the game would be possible at a low-gravity sports center in the space settlement.

The complete 88-page report can be found at http://settlement.arc.nasa.gov/Contest.

The students said they worked independently without teachers’ guidance, and communicated via e-mail.

Team Divinity will receive a $5,000 award and the awards ceremony will be held in Puerto Rico in May.