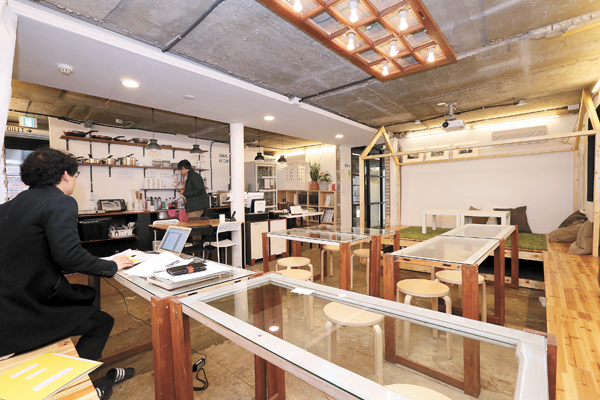 The lounge at Share Us, a share-house built after renovating a gosiwon. The building consists of personal rooms for residents and open spaces such as the lounge, a balcony and study areas. [SHIN IN-SEOP]

On a regular Monday evening, the mood at Share Us is pleasantly warm, if not familial. Residents idly chat about their day as they complete their chores, and in the kitchen, several people busily make sandwiches while students do their homework at a nearby table.

It may sound ordinary, even mundane, but what’s happening here is in fact something rather extraordinary. Namely, the rebirth of a community.

The building they inhabit, now a cheerful share-house brimming with life in Sillim-dong, southern Seoul, was once a bleak abandoned gosiwon, or residential structure consisting of pocket-sized bedsits that are popular among students for their cut-rate cost.

The neighborhood, located near Seoul National University, Korea’s top-ranking university, is a veritable forest of gosiwon and well-known by frugal students seeking a cheap and quiet place to stay while preparing for the Korean bar exam, the civil service exam or other national tests.

But Sillim, whose name literally means “new forest,” has of late become a forest of snags (standing, dead or dying trees often bleached to a cement shade of grey).

The establishment of law schools in 2009 and the government’s announcement to abolish the Korean bar exam by 2021 means that, according to the Gwanak District Office, the number of students studying for national exams in Sillim fell from 50,000 in 2010 to 20,000 in 2014 - a full 60 percent drop.

Meanwhile, the Seoul Metropolitan Government reports, the number of gosiwon in Gwanak District increased by more than 50 percent over the same period, which explains why so many are vacant today.

Hoping to reverse this trend, and attract more people in their 20s and 30s, the Gwanak District Office is trying to turn the area into a cultural and artistic hot spot, and Share Us is a first step in that direction.

Sun Lab Architecture Company, a social co-operative, was responsible for the renovation project. At the time, the building was made up of 5-square-meter (54-square-foot) rooms in which a bed and desk could barely fit together.

Hyun Seung-hun, head of the company, decided to reduce the number of rooms in the building from 44 to 19, clearing enough extra space for him to add a lounge, balcony and study areas where residents can interact, and expanded dorm rooms to accommodate two to six people instead of only one. 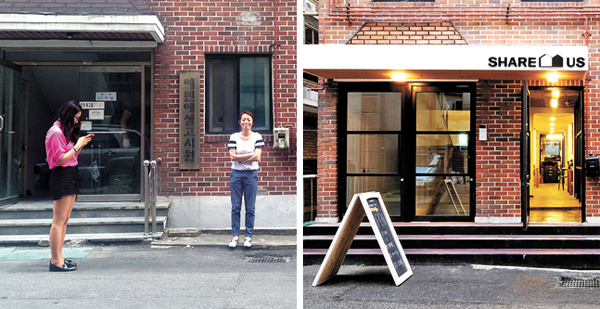 Left: The gosiwon building before its renovation Right: After the renovation. [SUNLAB ARCHITECTURE OFFICE]

Add to this the fact that Share Us residents don’t have to pay deposits either. Instead, they only pay a monthly rent of about 270,000 won ($230) to 350,000 won and a monthly utility fee that is usually less than 10,000 won. It’s an attractive deal, especially when compared to nearby gosiwon where residents pay deposits of about 10 million won and an average monthly rent of 400,000 won to 500,000 won.

Share Us tenants are understandably pleased with the arrangement.

“I cook alone, but I’m living with other residents, so I lead a more regular life here,” said Lee Jun-ho, a 21-year-old student at Seoul National University who recently moved into the share-house. “The place has all the benefits of a one-room apartment but all the perks of dorm life added in.”

Chisa Mori, a 23-year-old exchange student from Tokyo University of Foreign Studies, said her Korean speaking ability “drastically improved” after she moved into the share-house and began interacting more frequently with her Korean peers.

This has led to the budding growth of share-houses in Sillim, turning the once drab quarter into a place deserving of its name. One new share-house in particular, Artists Club House, has become a popular home for poets, playwrights and film directors.

Eager to fan the flames of this young artistic community, the Gwanak District Office has decided to subsidize the monthly rental fee for each of the residents living in the house, paying 200,000 won per person.

“The actual amount of money residents now have to pay is only 200,000 won,” said Huh Kyeong-jin, head of Artists Club House.

This allows artists living there to throw themselves more fully into their creative crafts, and that’s precisely what they’ve done, organizing various cultural events for Sillim residents. Last year, for instance, they hosted a lecture on how to make films using smartphones and forming a theatrical group that gave acting lessons to locals.

The Gwanak District Office is also looking for other ways to breathe life into the area. One official from the office said, “next year, we’re planning to take one part of Sillim, which used to be filled with gosiwon, and turn it into a Youth Dream Center.”