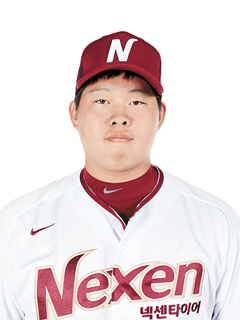 Nexen Heroes’ right handed pitcher Park Ju-hyeon had a successful debut over the weekend in the top division of the KBO.

Pitching in the game against Lotte Giants on Sunday, Park pitched in five innings while conceding no runs. The Heroes edged the Giants 6-5, making Park a winning pitcher in his first game.

Park was rather bold against the Giants, who were second among the KBO teams in the number of home runs last year with 177 homers, on Sunday. Park pitches combinations of straight balls and changeups. After striking out three players quickly in the first inning, Park also handled the second inning well.

After two outs, Park allowed a walk and loaded the bases. But Park threw off the Giants’ next batter Lee Woo-min with his changeups and eventually ended the inning without giving any runs.

Changeups were the weapon of choice for Dodgers’ Ryu when he made his debut in 2006. Like Ryu’s menacing balls, Park’s changeups are also developing rapidly. Park exploited his changeups in the remainder of the game to lead the Heroes.