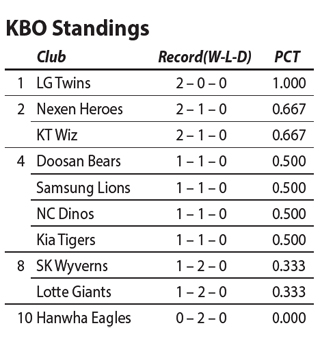 The KBO regular season officially took off last Friday and all 10 teams played over the weekend.

The LG Twins had perhaps the best start among the clubs, grabbing two wins over the weekend. The Twins won the first and second game on Friday and Saturday against the Hanwha Eagles 5-4 and 8-7. This places the Twins first in the KBO standings. Their third game against the Eagles which was scheduled for Sunday was rained out.

The KT Wiz also had a promising start in their second season in the KBO. In the three games against the SK Wyverns, the Wiz had two wins and one loss. However, it was not all good news for the Wiz as the team lost some of its key players including Kim Sa-youn who topped the rankings for home runs during the preseason. Kim fractured his left index finger and is expected to be out for at least eight weeks.

The Lotte Giants had a decent start, defeating the Nexen Heroes at Gocheok Sky Dome on Friday 2-1. Over 10,000 fans attended the game at Korea’s first domed stadium, where the Giants scored in the fourth and fifth innings to grab its first win of the season. However, in the second and third games on Saturday and Sunday, the Giants failed to continue the run and gave in to the Heroes 3-5 and 5-6 respectively.

The match that received the most attention was between last year’s Korean Series champ Doosan Bears and the runner-up Samsung Lions. Playing in Daegu at the Lions’ new stadium, the Bears and the Lions each had one win and one loss. Their third game was cancelled due to rain on Sunday. Lions ace Lee Seung-yuop had his 1,200th run-scored of the career and the first home run of the season on Saturday. He is expected to set a new career home run record this year if he hits more than 30 homers.

Finally, in the game between the Kia Tigers and NC Dinos in Masan, each team carded one win and one loss over the weekend, with their game on Sunday rained out. In Friday’s game, where the Dinos trailed over the Tigers, Dinos sluggers Lee Ho-joon and Eric Thames each had a home run. In Saturday’s game, in which the Tigers avenged their loss in the previous day by winning 4-3, the Tigers third baseman Lee Bum-ho went 2-for-4, driving one home run and collecting two runs batted in. His batting average for the game stood at .571. The teams had a day off yesterday.