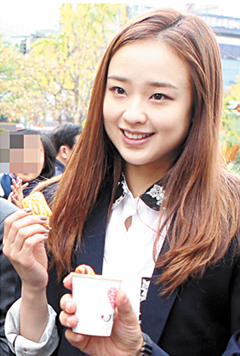 In the apparatus finals for individual senior, Son collected 18.550 points both in clubs and ribbon to card a silver medal in each event.

In the clubs, Margarita Mamun of Russia claimed the gold after scoring 19.100 points. For the ribbon, it was Ukraine’s Ganna Rizatdinova that took first place with 18.600 points, only .050 points ahead of Son and Russia’s Dina Averina, who tied for second place with the South Korean gymnast.

Son’s two silvers came after her record-setting day on Saturday, where she received a personal high in the individual all-around.

Son tallied 73.900 points on Saturday after collecting 18.550 points in hoop, 18.500 points in balls, 18.450 points in ribbon and 18.400 points in clubs. She placed fourth in the event, falling .650 points short of standing on the podium behind Ukraine’s Rizatdinova, who finished the event with a 74.550 points total. Son’s previous personal best was set in February during the World Cup at Espoo, Finland when she aggregated 73.550 points.

The two silver medals on Sunday mean Son has won medals in all the FIG World Cup events this season.

Son’s continuous success is a promising signal for the South Korean national team as it gears up for the Olympics in August. Son will be participating in the national team qualifiers on Saturday.