Lovato and Jenner recognized by GLAAD

Lovato and Jenner recognized by GLAAD 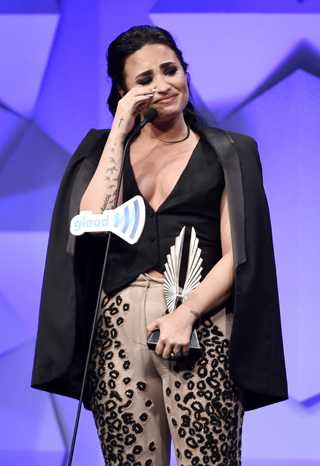 LOS ANGELES - Demi Lovato and Caitlyn Jenner are among the recipients of the 27th GLAAD Media Awards.

The awards honor those who further GLAAD’s mission of ensuring that stories of lesbian, gay, bisexual and transgender people are heard through media outlets.

Lovato is the recipient of the organization’s Vanguard Award, which she received from Nick Jonas during Saturday’s ceremony in Beverly Hills.

The singer was chosen for her advocacy for acceptance of the LGBT community. Lovato has spoken about her late grandfather, who came out as gay in the 1960s, and filmed the music video for her song “Really Don’t Care’’ at the L.A. Pride festival.

Jenner’s E! Entertainment Television reality series “I Am Cait’’ was honored for outstanding reality program. Jenner, who was born Bruce Jenner, is sharing the honor with transgender YouTube personality Jazz Jennings, who has a TLC show “I Am Jazz.’’

“I Am Cait’’ is currently airing its second season on the E! network.