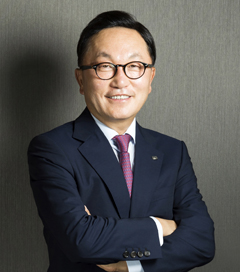 “The decision was made because the Capital Market Act bans an executive at an asset management firm from holding another high-profile position at a brokerage house, in order to prevent conflict of interest,” said a representative from Mirae Asset Securities. “Park will directly lead the merger process.”

Mirae Asset did not specify when Park will take office as chairman of Daewoo Securities, but insiders speculate the inauguration may take place as early as this week just after completing the payment of M&A costs.

The leadership may change after the merged firm launches later in the year, with an undecided number of CEOs joining to take charge of divisions, as existing Mirae Asset affiliates do, a Mirae Asset representative said.

The actual acquisition is scheduled to complete on Thursday, when Mirae Asset finishes paying the remaining M&A price of 2.09 trillion won ($1.82 billion), which is about 90 percent of the acquisition price. Mirae Asset also obtained government approval from the Financial Services Commission to change Daewoo’s largest shareholder on March 30.

The integrated firm will then work on restructuring the brokerage house to gain approval from the FSC by July, followed by stakeholders’ approval at the joint shareholders meeting in September. Mirae Asset Securities says it aims to launch the integrated brokerage giant by the end of the year.

Mirae Asset Daewoo Securities is slated to launch as the largest brokerage in the industry, with 7.75 trillion won in equity capital and 4,856 employees, according to Korea Financial Investment Association data. The integrated firm will manage 210 trillion won.