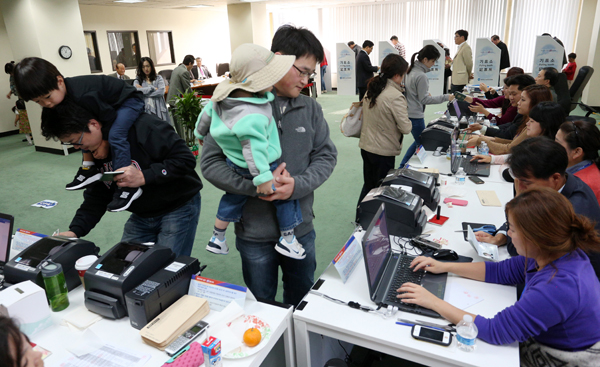 Four years ago in April, 2012, Mr. Kim, a Korean national living in Canada, flew to Vancouver from Edmonton — farther than from Seoul to Beijing — to vote in the Korean general election. Voters were only allowed to register at polling stations at the time, as he spent about 500,000 won ($435) casting his ballot.

At the time, the Korean government’s budget to manage overseas voting was 29.3 billion won. Each ballot cost about 520,000 won. If a voter had to spend extra money for the trip, as in the case of Kim, one vote could cost as much as 1 million won.
In contrast, the expense for one vote in Korea for a general election is 12,473 won.

This is the result of low overseas voting turnout. During the last general election, only 56,000 out of 2.23 million eligible voters overseas — or 2.5 percent — cast ballots. It is no surprise that many say overseas voting is useless.

And yet, the practice of overseas voting cannot be simply abandoned as the voters do not hesitate to travel far distances to cast ballots. After the overseas voting period started on March 30, many such cases were seen once again. On April 2, six voters, including three monks, arrived together at the Korean Embassy in India. They were residents of Dharamshala, the home of the Dalai Lama, and they traveled more than 400 kilometers (249 miles) in 11 hours to cast their ballots.

The election authority is doing its best to improve low turnout. Twenty-five new polling stations were added for the upcoming election. And yet, many residents need to fly to reach voting stations in large countries such as the United States and Brazil. Although voters can now fill out voter registration forms through the Internet or by mail, they are still required to cast ballots at the polling stations. As a result, actual turnout may still be low despite an increase in the number of registered overseas voters.

So what should we do? Many experts say introducing an overseas voting system via mail and the Internet is the answer. By allowing voting from home, turnout can go up drastically.

But this has been barred by Korean politics’ tradition of fighting for the party’s own interest. Because Internet voting will likely draw many young voters, the ruling party fiercely opposes it. In contrast, the opposition parties protest voting by mail because it will likely heighten the turnout of older, conservative voters.

To change the overseas voting system, which can cost 1 million won per vote, the ruling and opposition parties must end their fight and make efforts to raise turnout. That is the least they can do to serve the 7 million Koreans living overseas, who are determined to make contributions to their homeland.