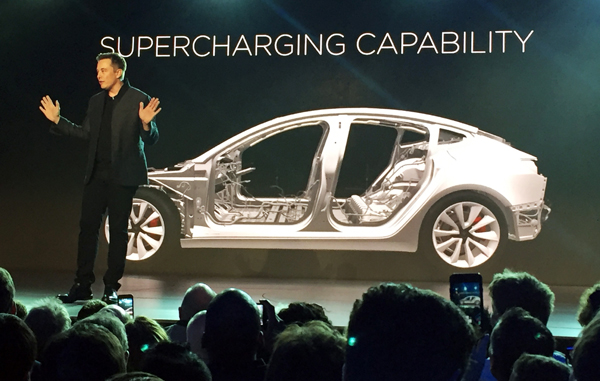 More than a dozen Korean car lovers have joined the global craze to see the American carmaker’s land in this country. Electric vehicles are in a fledgling stage in Korea, making up less than 0.5 percent of all cars on the country’s roads.

Among the prospective Model 3 buyers here is Lee Chan-jin, a legendary entrepreneur and early adopter. “I have put myself on the preorderer list. If something goes wrong, I can cancel at any time,” he wrote on his Facebook. Lee runs a Smart Car group on the social network.

When the prospective buyer has filled the preorder form on the Tesla homepage, which requires name, address and credit card information with a refundable deposit of $1,000, a message shows: “The production is scheduled in late 2017 and North American deliveries will be first, followed by Europe, Asia and Pacific countries.”

The order of countries for deliveries indicates the first mass-market electric vehicle from the Palo Alto, California-based company will likely not be shipped to Korea until after 2017. It is also possible that overall production of the Model 3 could be delayed, given the precedents with the previous two models.

Musk, an admired Silicon Valley entrepreneur, has a history of making reckless promises about product launches.

The company’s Model X, its second model and first sport utility vehicle, was launched in September last year after two years of delay - with a long order backlog of tens of thousands with refundable deposits of $5,000 or more.

Some analysts have forecasts that some customers may not see the Model 3 delivery until 2019 or 2020.

Much of the additional cash raised this year from the higher-than-expected demand for the new vehicle will be needed for Tesla’s new factories in the United States and for further product development, according to Barclays analyst Brian Johnson.

A car expert in Korea, who asked not to be named, went so far as to claim Musk “is already no longer interested in expanding the electric car business and is seeking a company to acquire Tesla - Samsung Electronics, among the candidates.”

Tesla has yet to launch operations in Korea, although it has registered the company with the Korean government and set up an office in southern Seoul. The corporate registration document shows that two legal experts at the automaker will serve as co-CEOs. The Korean office has recently hired a manager from the luxury goods industry in Korea, presumably to take responsibility for premium marketing here, according to a source.

Still, a car lover and blogger who says he was impressed with the Model S during his visit to San Francisco in 2015, said he is willing to wait as long as it takes until Korea has the appropriate infrastructure and incentives for electric vehicles. He already owns a Porsche Boxter GTS roadster.

“I don’t mind the delivery delay because I know it will take sizeable time for electric vehicles to settle in Korea and I believe Tesla’s entry will contribute to ramping up related infrastructure,” he wrote.

Kim Pil-soo, president of the Korean Electric Vehicle Leaders’ Association (KEVA), says 2018 is set to become the year for the Korean electric vehicle industry. “The arrival of Tesla in Korea is set to become a game changer in the auto industry and cause an enormous ripple effect that we can’t possibly fathom,” Kim said.

But the country is not ready yet, he said. “We are already far, far behind other advanced economies when it comes to eco-friendly cars and ultimately the overall car industry and we need tremendous efforts to catch up.”