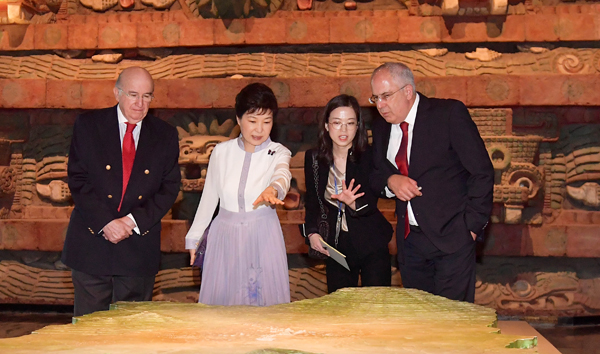 Korean President Park Geun-hye said a free trade agreement with Mexico will provide new impetus to the two countries’ economic relationship and predicted a “win-win” situation for both countries in an interview with local media ahead of a bilateral summit with the Latin American country’s leader.

Park was scheduled to enter talks with Mexican President Enrique Pena Nieto on Monday and the two leaders were set to sign 34 memorandums of understanding, 29 in economy-related areas. Park told the Mexican daily El Universal that a bilateral free trade deal would be meaningful to “expand trade and investment and strengthen economic cooperation.”

Mexico is the first Latin American country that Korea established a strategic partnership with and is Korea’s largest trading partner in the region.

Park said in the interview that if a free trade pact could be sealed, it would be a “win-win situation” for both countries and “open a new gateway to Northeast Asian markets for Mexico, and provide greater access for Korea to North and Latin American markets.”

Park added it is “necessary to strengthen cooperation between the sides to address difficulties faced by investors,” including Kia Motors, Korea’s No. 2 carmaker. The two sides had bilateral trade of over $17 billion last year. The president said she hoped through her visit to enable Korean companies to contribute to infrastructure modernization projects in Mexico through the signing of MOUs and expansion of cooperation in the financial sector.

During the summit, the two leaders were expected to discuss launching working-level talks to negotiate a bilateral FTA, sign agreements on large infrastructure and water resources projects, as well as on trade and investment, energy, health and cultural exchange, according to Kim Kyou-hyun, the senior presidential secretary for foreign affairs. The two countries previously began talks on a free trade pact but they were put on hold.

The president was accompanied by 145 Korean businessmen from 144 companies, according to the Blue House. Park, who kicked off a four-day trip to Mexico on Saturday following the Nuclear Security Summit in Washington last week, spent Sunday bolstering cultural exchange between the two countries.

Earlier that day, she visited the National Museum of Anthropology in Mexico City and attending a concert, “K-Soul in Mexico,” that included a performance by K-pop boy band Infinite. It was attended by over 3,000 fans. The two countries are also partners in a group of middle-powered nations called Mikta that includes Indonesia, Turkey and Australia.