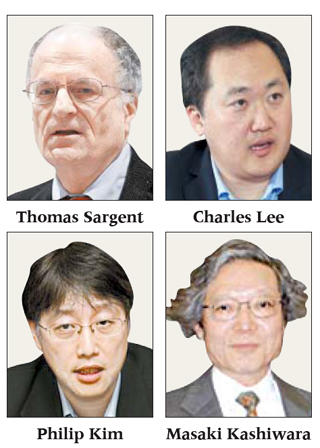 Students and professors at Seoul National University (SNU) may find it surprising to learn the university has, for the past four years, spent roughly 3 billion won ($2.6 million) per year aimed at attracting Nobel Prize winners, Fields Medalists and other prominent scholars to the school, given that few have ever signed on full-time.

SNU has had a total of 11 scholars who were Nobel, Fields Medal or other academic awards laureates since 2012, including Charles Lee, the 2008 winner of the Ho-am Prize in Medicine, Masaki Kashiwara, the mathematician known for introducing algebraic crystal bases, and Thomas Sargent, the famed economist.

There are now six such scholars at the university, including Aaron Ciechanover, the cell biologist who won the 2004 Nobel Prize in Chemistry. Yet none are currently teaching regular courses.

“The university initiative began with fanfare, but the reality is that these laureates and scholars spend maybe less than two months in Korea out of their total one-year contract with the university,” said a professor at SNU’s College of Natural Sciences.

An SNU official admitted scholars at the school are not lecturing regularly, but that they are “engaged in holding research presentations and joint research projects.”

For example, Philip Kim, a condensed matter physicist and winner of the 2014 Oliver E. Buckley Condensed Matter Prize, granted annually to scholars acknowledged for outstanding contributions to condensed matter physics, has never been scheduled to teach regularly at the university since he was invited in March 2013.

When asked about Kim’s teaching schedule this year, an SNU official said, “Nothing specific can be confirmed as of now.”

In some cases, the fault is not entirely with the university; most Nobel Prize winners, or other academic prize laureates, are expected to have tight schedules.

“When the university signs contracts with Nobel laureates, it is quite common for the scholars to request to stay within Korea for 90 days or sometimes less, because they have their own research and academic work ongoing from the schools they are based in abroad,” said an SNU official who coordinates such meetings.

But looking into the records of how Nobel laureate Thomas Sargent was treated by SNU back in 2012, it is perhaps understandable why some academics would rather not spend too much time in Korea.

Thomas Sargent won the Nobel Prize in Economics in 2011, and SNU secured a contract with him by agreeing to pay him 1.5 billion won per year, including an 800 million won research subsidy. But after one year of teaching, Sargent broke his two-year contract to return to the United States.

“I don’t know why a Nobel laureate was teaching undergraduate macroeconomics,” recalled a current SNU student majoring in economics. “Not a lot of students knew about Sargent or his background, and many dropped the course because it was in English.”

As of February, SNU had 214 foreigner professors, yet it remains unable to provide them with basic administrative resources and many must rely on teaching assistants who can speak English to translate university documents drafted in Korean.

“A foreigner professor that I know complained that the university lacks a fundamental system in responding to the research and administrative needs of its international staff,” said Oh Se-jung, professor of physical astronomy at SNU.