KBO hopes for record-breaking crowds in 2016

KBO hopes for record-breaking crowds in 2016 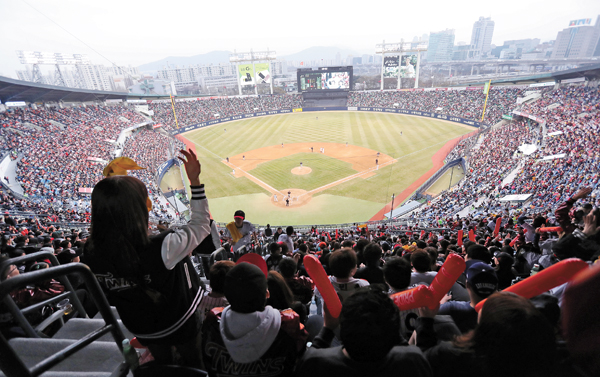 Twenty-six thousand spectators fill a sold-out Jamsil Baseball Stadium to watch the Hanwha Eagles take on the LG Twins on April 2. With the increasing popularity of the sport, the Korea Baseball Organization expects to see the highest-ever attendance this season. [YANG GWANG-SAM]

Franchises that have invested big in new ballparks namely the Samsung Lions and the Nexon Heroes ? are also hoping to see the largest crowds in their histories.

That figure is based on the targets announced by each club, and is about 18 percent higher than the number of people that attended games last season (7.3 million).

The Lions are aiming to draw 840,000 fans this season, which would be the most in franchise history. After playing at Daegu Baseball Stadium for 34 years, the Lions moved to the Daegu Samsung Lions Park, the first diamond-shaped baseball park in Korea, this year.

The franchise is off to a good start after the first weekend of the season. Tickets were sold out for the opener against the defending champion Doosan Bears on April 1, meaning 24,000 fans were there in support. Attendance was strong in the second game the following day, at 20,346.

The Heroes are also hoping to break franchise records this year by drawing 600,000 fans. Their new home stadium, the Gocheok Sky Dome, can hold 16,000 people and is the first domed baseball stadium in Korea. A total 10,446 fans came to the season opener, rising to 11,518 the following day and 12,016 on April 3, when the Heroes defeated the Lotte Giants. 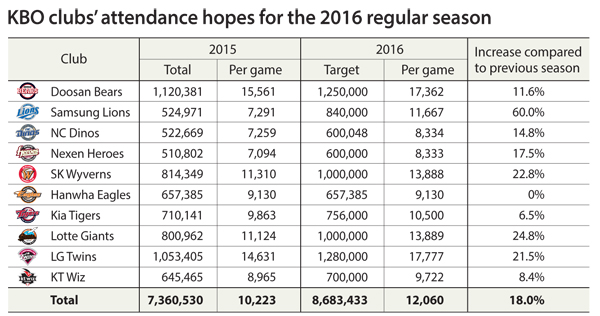 The domed stadium is also paying dividends. Across town in Jamsil on April 3, the game between the Hanwha Eagles and the LG Twins was rained out while the Heroes were able to stay dry in their new digs.

Despite its structural disadvantages, Jamsil Stadium is expected to draw the most fans this year as it is home to both the LG Twins and the Doosan Bears. The Twins are aiming to draw over 1.28 million, while the Bears are expecting to bring out 1.25 million.

Last year, the Korean Series-winning Bears were the most popular among the KBO’s 10 clubs, drawing 1.12 million fans. The Twins followed closely at 1.05 million.

After drawing over 800,000 fans last year, the Giants hope to see 1 million come out in support this year. This has been the franchise’s target for the past three seasons, though they’ve failed to hit the mark each time. SK Wyverns, who just installed the world’s largest LED panel in their home stadium in Munhak-dong, Incheon, hopes to bring in over 1 million fans this year as well.

The Kia Tigers are hoping for 756,000 fans, the most in the club’s history. The NC Dinos, who have made it to the postseason the last two years, are aiming for 600,048 spectators. The Eagles are keeping their hopes the same as last year at 657,385. The KT Wiz, meanwhile, is aiming for over 700,000 fans in its second season in the league.