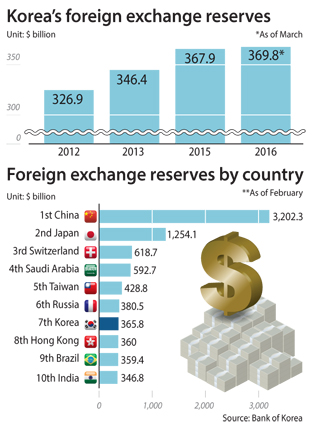 Thanks to the recent weakening of the U.S. dollar, Korea’s foreign exchange reserves grew in March after declining for four straight months.

According to the Bank of Korea on Tuesday, the foreign exchange reserves of the fourth largest economy in Asia stood at $369.84 billion as of late March, up $4.08 billion or 1.1 percent from $365.76 billion in February.

The March figure marks a rebound for the first time in five months, the data showed.

“The increase can be attributed to significant appreciation in non-dollar foreign assets including the euro and pound in accordance with the weakening dollar,” said the central bank in a press release. “In addition to that, returns of managing the foreign exchange reserves rose.”

The U.S. greenback has started to depreciate as the Federal Reserve showed a careful stance on raising its key interest rate last month.

Foreign exchange reserves are comprised of $340.5 billion in securities, $20.3 billion in deposits denominated in other currencies, $1.84 billion in International Monetary Fund reserve positions, $2.38 billion worth in special drawing rights (SDR) from the IMF fund and $4.79 billion in gold.

As of February, the country was the seventh-largest holder of foreign exchange reserves, the report highlighted.

Most of the increases in reserves came from overseas securities held in non-dollar currencies, the report said.

Holdings in gold remained unchanged from February at $4.79 billion.