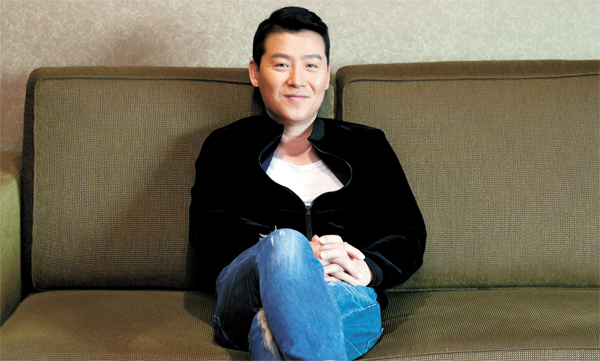 Singer Lee Hyun-woo talks about his prolific career and his recent appearance in the musical “Mamma Mia.” [JEON HO-SUNG]

Singer Lee Hyun-woo, 50, has cultivated a unique image since he debuted in 1991 wearing a leather biker jacket and performing electro music.

In the early 1990s, it was rare to see a Korean singer, or in Lee’s case Korean American, with such a gentlemanly persona. The singer’s exotic voice and somewhat rough attitude added to his chic city man style, which is called chadonam in Korean.

Then Lee surprised fans even more in the early 2000s by expanding his career beyond singing and into acting. In the TV drama “Attic Cat,” which aired in 2003, Lee acted very robot-like and seemed almost soulless. Even though he has participated in another seven drama series and three movies, his stiff acting remains unchanged.

If other actors gave such performances, they might have been mocked for bal yeon-gi, which means acting by foot. But Lee’s performance style draws attention, being quite fixating.

Lee’s unique, stiff acting can also be seen in the jukebox musical “Mamma Mia,” in which he plays Harry, one of the three father figures. Lee is appearing in the show along with seasoned musical actors such as Choi Jung-won and Nam Kyung-joo. Even though the acting styles differ from dramas to musicals, Lee’s acting seems consistent.

When Lee, who plays Harry, sings his only solo number in the musical, “Our Last Summer,” he is just like the singer people remember from the beginning of his career.

“I don’t understand why people say I don’t have soul in my performance. I cannot agree with this statement,” Lee said with a smile.

In contrast to his outer appearance of coolness, he is sincere and kind when answering questions about himself, showing his considerate side.

“Before, I was regarded as one of the difficult interviewees who replied questions with a short sentence,” Lee said. “But now I have changed, after marriage.” 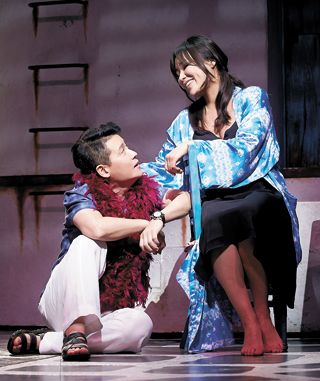 After his first appearance in “Mamma Mia” in 2011, he started thinking of himself as acting more like a father, since he actually has a son in elementary school.

For this season’s staging of “Mamma Mia,” even original members of the cast had to go through auditions. Lee thought it was an interesting experience.

“I have never been to an audition, since I was mainly a judge,” Lee said. “It was quite a funny experience. In a long hallway, Nam was also sitting on a chair waiting to be called. Each person goes to a big room with [the production team] sitting down to evaluate. There was only a grand piano in the center. It was the first time I felt so nervous. I had to sing over again because I sang too loudly for the softer parts.”

Among professional musical actors and actresses, one might expect Lee to feel out of place. However, he sees it differently. As many people perceive him as a celebrity rather than a musical actor, he doesn’t feel any incompatibility.

“I am proud of myself being cast, and I believe there must be a reason why I have been selected to take the role,” Lee explained. “Harry is a bright and simple person that I feel comfortable in it compared to other roles.”

Also, Lee does not care about doing embarrassing dance moves while wearing the shiny, tight costumes. He rather sees it as a departure from daily life.

“If it were not for this musical, I might not have any opportunity to wear such fancy customs,” he said smiling. “The musical also will be a departure for the audiences. They can feel that they are on a quiet island in Greece, away from busy cities. And I appreciate that I can be the part of such a departure.”

The singer uses his own buzzword, “Chua!” instead of “Oh, my God!” It adds humor to the monotone character of Harry.

In addition, it helps Lee make the character more his own.

“‘Mamma Mia’ is one of the few musicals where I can be myself,” Lee said.

In fact, Lee is somewhat similar to his on-stage character, with both men being romantic. While he used to have a cold image, Lee says his character changed after his marriage. Lee thinks that romance is an important factor in a happy life.

“After I got married, I tried to be a soft guy, and it seems much better than being cold,” Lee said. “I put effort into being a warm-hearted person by approaching others first. My acquaintances were also happy with the change.”

Being a radio host has also helped drive the change. His radio program, “Lee Hyun-woo’s Music Album,” has been going on for nine years. By listening to diverse people’s stories, Lee has learned new communication skills.

“I originally did not know how to communicate, since most people put me at the center and I did not have to be in their shoes. It was not considerate of me,” Lee said. 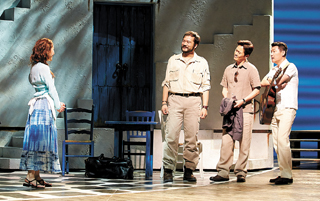 But the singer began to listen to people’s stories and sympathize with them.

Lee says the absence of stimulation is the key to his show’s longevity. “Today’s media channels focus too much on stimulating. Radio has to be the last to change, sustaining its cleanliness and simplicity,” he explained.

“I want my radio to be comfortable so anybody can listen to it without feeling stimulated,” Lee added. “There is neither scolding nor complimenting. If someone sends a message that he or she got a finger cut, I would say it’s fortunate that you did not cut your hand.”

Being a radio host does not make Lee affluent, but he is happy. He wants to be like Bae Chul-soo, the KBS radio host. He wants to grow old together with his listeners.

“Bae is one of the people I respect. He sometimes is like a boy and sometimes a philosopher. There are various colors in his life. I like how he talks with listeners about everyday issues,” Lee said.

“Mamma Mia” is the second musical he is appearing in after “Singles” in 2007. Even though he has only one solo song, Lee is satisfied with it.

“The musical does not occupy my whole schedule, which is perfect for me. For a singer, there are lots of improvisations on stage according to the condition of your throat,” Lee said. “However, it does not apply to musicals, because the stage is the most important thing to consider.”

He has no craving to further expand his acting career. Rather, he just appreciates the opportunities given to him to be on stage. He does not like the idea of playing a bad guy, either.

“I have gotten several offers but I declined since my wife does not like it,” he said. “Now, my family is the center of my universe, not me. The comfort of my family is more essential than expanding my career. But, if I have a chance, I want to have a chance on a comedy program. It would feel nice to make people laugh.”

Based on these responses, it is clear that Lee isn’t driven by greed, but rather doing what interests him. His next challenge will be holding a second art exhibition in July.

“I have been working on my drawing since two years ago. Actually, my major was art, so I constantly made drawings. After my first exhibition, I feel that I am responsible to show my improvement to the buyers,” Lee explained.

At the same time, he perceives that the music is changing. He says the industry has become more about consuming rather than enjoying.

“I do release single albums, but I do not feel like actively participating in the music scene. I really want to release music that is mature and shows my full competence,” Lee said. “But as I am not the type of early-adopter in the rapidly changing industry, I do not seem to release trendy albums. Nevertheless, there should be someone like me, so that the music industry can be more diversified.”