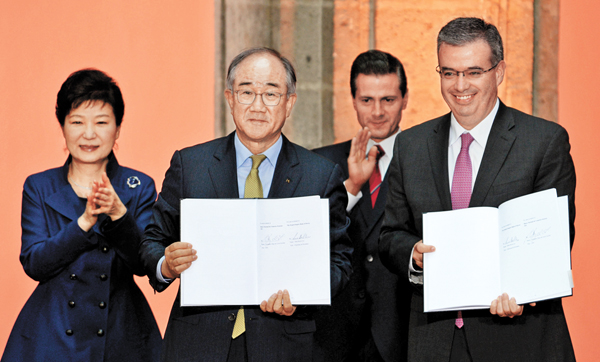 The Export-Import Bank of Korea has made it easier for Korean businesses to enter Mexico by signing partnerships with major institutions in the country in the power generation and public finance sector.

The state-run financier for exporters said on Tuesday its CEO Lee Duk-hoon met with Enrique Ochoa Reza, CEO of Comision Federal de Electricidad (CFE) at the National Palace on Monday, to sign a $1 billion agreement to help finance projects by 2018 and exchange information on projects. CFE is the largest electricity provider owned by the Mexican government, engaging in a variety of businesses including construction of independent power plants and the establishment of shale gas pipelines.

President Park Geun-hye, who is currently on a four-day visit to the country, and her counterpart Enrique Pena Nieto, joined the ceremony.

Mexico is expected to be a highly promising market for Korean firms.