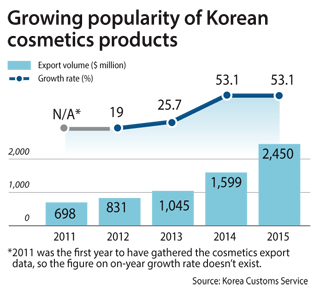 Cosmetics exports increased 53.1 percent on year in 2015 to $2.45 billion, according to Korea Customs Service on Tuesday. Exports of cosmetics by volume have increased by an average 36.9 percent every year since 2011.

“It appears that exports are growing as Korean media gets more popular around the world,” said Seo Jae-yong, a director at Korea Customs Service. “The government’s efforts, such as the easing of certain regulations and expansion of support for small to mid-size companies, also helped it to grow.”

Exports of Korean films spiked by 337.5 percent in the third quarter of last year compared to the previous year, while exports of music and other kinds of media rose some 70 percent, according to the Korea Creative Content Agency.

By region, China was the biggest importer of Korean cosmetics for six years, accounting for 40.6 percent of total export volume. Exports to China grew by 52.4 percent a year in the past five years. Exports to Hong Kong accounted for some 25 percent and the government’s data clearly shows that people from Greater China are getting more interested in Korean cosmetics.

Japan, on the other hand, was the second-largest importer of Korean cosmetics products in 2011, but it fell to the fourth last year. Korea Customs Service said the weakened Japanese yen and worsened relationships between the two countries might be the reason for the recent fall.

Foreign buyers using e-commerce websites have risen by 5,158 percent since 2011 to $12.6 million last year. Purchases made on the sites account for only 0.8 percent of the total export volume of cosmetics, but this figure is growing by 747.5 percent each year on average, according to the customs agency.