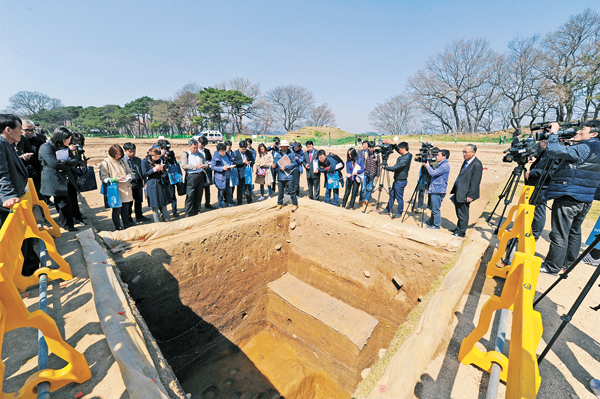 Members of the media take a look at the 2.3-meter (7.5-foot) trench that has been dug in section C of the Wolseong castle site in Gyeongju. [CULTURAL HERITAGE ADMINISTRATION]

GYEONGJU, North Gyeongsang - In the heart of this historical city that was the capital of the Silla Dynasty for a thousand years, there’s a vast area shaped like a crescent moon called Wolseong.

Literally translated as “moon castle” in English, Wolseong, which measures more than 200,000 square meters (49 acres), is considered one of the most important historical sites in Korea, for it was the seat of the Silla Dynasty (57 B.C. to A.D. 935).

But after Silla fell to the Goryeo Dynasty (918-1392), Wolseong was abandoned and began to crumble away, leaving behind no records or any trace of its existence for the next 1,000 years.

The next available records on the site, which is designated as Korea’s Historic Site No. 16 as well as being on the Unesco World Heritage list, indicated it was used as farmland during the Japanese colonial period (1910-45).

“That is why the excavation process and archeological research we are conducting at the moment are of critical importance,” said Lee Jong-hoon, researcher at the Gyeongju National Research Institute of Cultural Heritage. “You don’t know what’s going to get discovered from this vast land and what new findings we’ll have of the unknown 1,000 years. It’s like a treasure island.”

In December 2014, the institute began digging trenches in several parts of this mysterious site for what would be one of the country’s most important archaeological explorations in history. Last March, it finally launched a detailed excavation investigation. And last Wednesday, the Gyeongju National Research Institute of Cultural Heritage revealed the findings to the public.

According to various historical texts including “Samguksagi,” “Samgukyusa,” “Dongguktonggam” and “Dongsagangmok,” this crescent moon-shaped land was occupied by a foreigner, whom Seoktalhae, the fourth king of Silla, called Hogong. The king found the location, so he decided to extort it from Hogong and reside there.

“Samguksagi,” or “The Chronicles of the Three States,” states that Wolseong was built in year 101 and was used for 800 years as the residence of Silla kings. “Sillabongi,” a record made during King Heongang’s (47th ruler of Silla) six-year reign, indicates that the king went up to Wolsangru, the highest point of Wolseong, together with his courtiers and looked out in every direction, and that the sound of music resonated from the surrounding homes of his people.

But since so few records remain of how Wolseong was used, it is necessary to find out through excavation. After only a year of digging and scanning have been carried out, already quite a large number of artifacts and other pieces of evidence have been uncovered.

When this reporter visited the site last Wednesday, dozens of researchers were carefully digging in several areas, each using a pickax in the hopes of discovering evidence that will help fill in holes in Korean history.

Researchers at the Gyeongju National Research Institute of Cultural Heritage found various artifacts from different periods during the Silla Dynasty, including special kiwa (roof tile), left, that are shaped differently from previous discoveries, as well as more than 50 pieces of broken inkstones, center, and various pieces of earthenware that show the lifestyle of the Silla people. [CULTURAL HERITAGE ADMINISTRATION]

It’s difficult for a regular visitor to work out where the buildings were located and where the pillars were erected just by looking at the shapes of the rocks and stones embedded in the ground. But with the help of a diagram and an explanation from a researcher, it becomes easier to imagine what Wolseong would’ve looked like. For convenience, the institute divided the vast land of Wolseong into four sections - A, B, C and D. Currently, researchers are focusing on exploring section C and the west side of section A.

According to the Gyeongju National Research Institute of Cultural Heritage, section C used to contain four large buildings that were presumably used for writing out royal documents.

“We conducted an underground radar search of the area and found four large buildings,” said Lee from the institute. “It looks like they were used as kings’ offices and queens’ residences.”

The researchers also dug a trench through the center of Wolseong in section C, about 2.3 meters (7.5 feet) deep, and found diverse artifacts that show the changes in lifestyles of Silla people in nine different layers of soil. According to the institute, the researchers also found out by studying the sides of the trench that they could see “two cultural layers of Unified Silla [676-935] and five of Silla.”

A large number of broken inkstones were found in this section, implying that the area had been actively used to write up official documents.

“More than 50 pieces were found, which is a lot more than other places we’ve excavated,” Lee explained. “We’ve also excavated a large number of earthenware and roof tiles of different times.”

According to Shim Young-sub, head of the institute, more discussion with experts is required to decide how to go about excavating the vast area so as to avoid mixing up artifacts from different eras.

Since the site is so huge and contains so much history, Shim said the institute will need another 20 to 30 years to complete the research. In fact, in 1915 the site was first explored by a Japanese archaeologist who uncovered animal bones and teeth, as well as grains and earthenware. Then under Park Chung Hee in 1979, the Korean government purchased the land and launched an excavation, confirming the existence of a gate on the eastern side as well as a moat. But after Park’s government fell, the research ceased. The excavation finally resumed under President Park Geun-hye, Park’s daughter, as it was one of her presidential campaign pledges.

Meanwhile, research is continuing on the west side of section A, where the institute launched the excavation mid last year. So far, they have found that the castle wall was last renovated during the eighth century. There are also traces of a gravel walking path with a width of 3 meters that looks like it was used as a road to access Wolseong during the Joseon Dynasty (1392-1910).

Despite hopes of finding traces of how Wolseong was used during the unrecorded 1,000 years after the Silla Dynasty, the institute said it hasn’t found anything so far.

“We assume that after Silla was handed over to Goryeo, no one used this site until the Japanese colonial period because perhaps people considered the site to be sacred,” Lee said. “That’s probably why there are no records or traces of anything for the next 1,000 years.”

“This year,” Shim said, “our aim is to focus on restoring the exterior of Wolseong ... to the level that anyone can recognize that this is Wolseong. After that, we’ll continue working on the inside.”