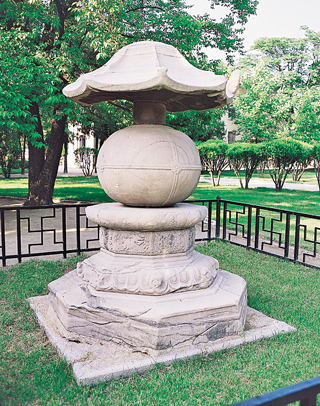 This reliquary monument, set up to honor eminent Goryeo monk and State Preceptor Hongbeop, had originally been located at a Buddhist temple called Jeongtosa in Jungwon County (today’s Chungju), North Chungcheong, but was moved to Gyeongbok Palace in 1915 and, finally, to its current location in the National Museum of Korea in Seoul.

Hongbeop was an eminent spiritual leader for the Korean Buddhists in the 10th century, introducing them to Seon (or Zen) Buddhism that he had studied in Tang Dynasty China.

On the pedestal is a spherical stone carved with ropes tying the stone sphere crisscross with floral motifs placed on the spots where the ropes intersect.