‘Couples should take courses to learn how to raise children’

‘Couples should take courses to learn how to raise children’ 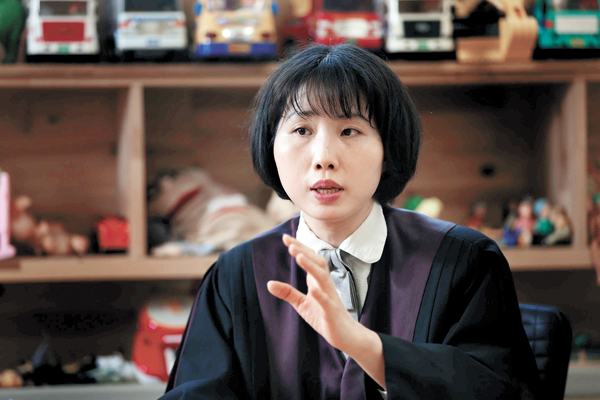 When one accounts for the number of child abuse cases that didn’t become criminal cases, as well as unwitnessed abuses, it’s unconscionable that so many children are suffering at the hands of people who should be, instead, taking care of them.

In 2014, to curb the number of child abuse cases, the National Assembly enacted the Special Law on Punishments in Child Abuse Cases, mandating child care facilities to report any signs of child abuse to relevant authorities and increasing the severity of punishments given to convicts.

Despite such legal actions, there still seem to be people who maltreat the most vulnerable members of society — children.

Shin Soon-young, 37, a justice in the Seoul Family Court, was one of the first to witness the heartaches and wounds of children who suffered from abuse and family breakups.

“I can’t forget the way the children looked at me,” said Shin.

“It seemed they were screaming out for help.”

A court’s major job is to sentence criminals after a crime has been committed. But Shin’s idea on how to deal with child abuse cases changed as she began her work in the family court.

“There’s a saying — Justices talk through their verdicts. This might be true for other cases, but not for cases involving families and children,” said Shin.

“Because the Family Court goes very deep into the lives of children and their families.”

This is exactly why, six years ago, some judges came together to form the Research Committee for Parental Education. The committee, affiliated with the Supreme Court, currently has about 300 members, consisting of judges and seasoned investigators. The committee makes video clips and brochures for divorced parents in 12 different languages, catering to multicultural families.

Shin, however, emphasized preventative measures above anything else in efficiently curbing child abuse. Shin has been leading a movement requiring changes to the law regarding the registration of family relationships, in order to mandate couples to take parenting education after they register their marriage.

Thanks to politicians Na Kyung-won and Shin Yee-jin, Shin was able to open a debate on the issue in the legislature.

Justice Shin has two children of her own, a three-year-old and a five-year-old. Both of them are similar in age to Shin Won-yeong, whose corpse was found in March after he was beaten by his step-mother and buried by his father, at age 7. Child abuse cases and divorce cases, therefore, feel much closer to home for her.

“As I judged in family trials, I met with children of divorced parents,” said Shin. “When I talked with them, they were all so precious. But there was a great darkness in their minds. I couldn’t help myself from crying.”


Q. What kind of children did you meet?

A. My encounter with a bright 5-year-old girl came to me with the most shock. She was very smart, intelligent, shrewd and outspoken about her feelings. We had done some role playing activities with dolls. Suddenly, she started beating the father doll with the mother doll and said, “Die, die.” The child’s familial problesm came up to the surface so clearly in that way. Children don’t hide anything.

Unless the wounds are physically visible, it becomes difficult for the neighbors to spot the psychological abuse the child might be suffering. As most of the symptoms of abuse are invisible, kindergartens and neighbors have to take a more active interest in the child. If you go closer, you can see through their hearts.

Some say that legal measures against the corporal punishment of children have to become stricter to allow neighbors to easily intervene in cases of child abuse.

In that case, there will be more reports on child abuse cases. But punishment is not everything. Most of the parents who abuse their children were raised with very little love. Since they themselves were the victims of child abuse — and they weren’t loved by their parents — it might be too much to ask them to give love to their children. Consistent interest, education and love should come first, as punishment doesn’t solve everything. One must also learn how to love.

Shin mentioned a 10-year-old girl, using the pseudonym Eun-seo, as an example of how violence is passed down from one generation to the next.

Eun-seo drew a picture of her father, but she drew him as a very scary monster. He was an abusive father. He had a belt-like strip in his hand. One could easily tell that he was a horrible human being. When I talked with the father, however, I found he also suffered from wounds he acquired in his childhood. His mother, beaten up by his father, ran away from the house and he was abused by his step-mother. Since he was raised in pain, he didn’t know what to do with his own child and he had very low self-esteem … That’s why he hit his child and wife.

In such cases, since you can’t rely on the abusive parents for familial education, you would need the school to provide it.
This is where education kicks in. In middle and high school, you don’t have curricula on proper communication or pre-marital lessons. Korea should include such topics in subjects that cultivate students’ personalities, or make a separate class to teach such subjects. Such a project is already being done in other countries.


Have you ever received such education?

I wasn’t educated on such things when I married. As I judged in family trials, I participated in education classes set up for the involved parties. Marriage isn’t only about preparing the outside; it’s also about preparing the inside. This is why I think couples who are about to marry should receive mandatory pre-marital education.


Is it possible to force such education?

In most of the states in the United States, people have to acquire a marriage license from civil servants. Also, the government incentivizes people to receive such education. The lesson goes for four to 12 hours. But in Korea, showing a one hour video clip will do the job.


People don’t even remember the officiant’s message in their wedding. Would they remember what they learned in the pre-marital education?

You’re right. This is why the education has to be done in a fun way. We have to put in the most qualified experts in the field to make memorable and efficient curriculum.

Since it’s the era of videos, we could turn the contents into video clips and share it via smart phone apps and distribute brochures. The couples can look at it whenever they are facing conflict.


I heard the committee even made a video for divorced parents, how did that go?

In the beginning, the court opposed it, but once we started showing the videos the result was quite remarkable.

Some spouses changed their minds and said they would not divorce. Many of them cried while watching. There were some opinions in the court that we should mandate every couple to watch the video.