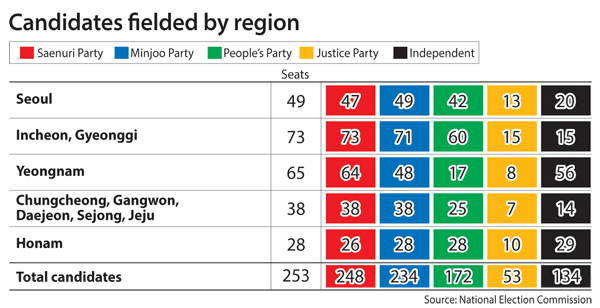 With the April 13 general elections just a week away, the main opposition Minjoo Party and minor People’s Party leaders both declared they were abandoning any attempt at an alliance to field single opposition candidates in races to avoid splitting the liberal vote.

The printing of ballots began Monday. Before that, the only place that the Minjoo and People’s Party were able to agree on a joint candidate was in one constituency, Chuncheon in Gangwon Province.

On March 29, the People’s Party’s Lee Yong-beom abandoned his candidacy in support of the Minjoo’s Huh Young, who had higher support in the constituency according to an opinion poll.

And even if the opposition parties agree to an alliance against the ruling Saenuri Party contender in other constituencies and a candidate drops out of the race, there is less effect after the ballot papers are printed.

The ballots will still include all the contenders’ names, which could confuse votes and lead to more split votes.

In July 2014 by-elections, opposition party contenders for Dongjak B District in Seoul, Roh Hoe-chan of the minor Justice Party and Ki Dong-min and New Politics Alliance for Democracy, the precursor to the Minjoo Party, agreed to an alliance. Ki agreed to drop his candidacy. But his name was on the ballot and the ruling Saenuri Party candidate Na Kyung-won beat Roh by a difference of 929 votes. Some 1,403 votes were declared invalid, many because they voted for Ki.

One Minjoo candidate who is working on such an alliance said Monday, “The golden time for an alliance was until today. The second best option is for a merger to happen by the early voting period [on Friday and Saturday].”

Kim Chong-in, interim leader of the Minjoo Party, told reporters in Suwon, Gyeonggi, “I will no longer speak of that issue and we will hold the elections whether the People’s Party is there or not.”

“We do not plan on speaking about a merger in the party anymore,” said Jung Jang-sun, the Minjoo’s campaign planning manager. “We will highlight the ruling party’s failure to manage the economy and pour all our efforts into facing off one-on-one against the ruling party.”

Likewise, Lee Cheol-hee, the party’s senior strategist, said, “Because of the merger question, the tensions between opposition parties have been underscored and the president and ruling parties disappeared in this election. In the framework of this election, there is no more alliance.”

The Minjoo Party is now putting its efforts into encouraging voters in their 20s and 30s to take advantage of the early voting to take place Friday and Saturday.

Early voting is held for people who don’t think they can make it to the poll on April 13.

Lee Jae-kyung, spokesman for the Minjoo’s election committee, said, “Chairman Kim Chong-in and all the party’s candidates are holding a campaign with the goal of reaching an early vote turnout of 20 percent.”

Early voting was first adopted in the 2013 local elections and garnered a turnout of 11.5 percent of total voters.