The next industrial revolution

The next industrial revolution 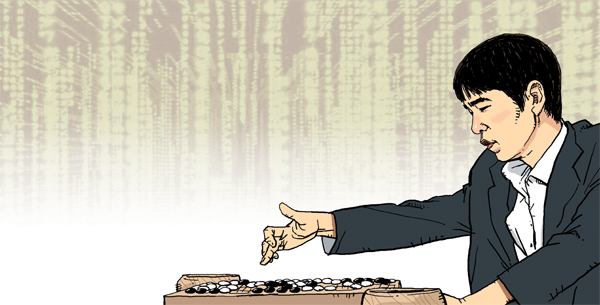 “Imitation Game” is a biographical film about the lonely life of visionary genius Alan Turing. The technological concept of artificial intelligence originates from his 1950 paper “Computing Machinery and Intelligence.” The term AI first appeared at the Dartmouth Conference in 1956. Turing’s “thinking machine” was discussed and scientists predicted a computer would one day become a world chess champion.
The prediction came true with the Fredkin Prize. In 1980, Carnegie Mellon University offered a $100,000 prize, and the Fredkin Foundation’s award went to IBM’s Deep Blue. In 1997, Deep Blue beat world chess champion Garry Kasparov. Edward Fredkin, the pioneer of digital physics and an AI expert, said that creation of the universe, creation of life and creation of AI are the three biggest events in cosmic history.

At the first match between Lee Se-dol and AlphaGo, I thought Fredkin’s prediction was a matter of time. A professional Go player cannot beat AlphaGo that studies a million matches a month and considers 40 moves ahead. The technological advancement makes Lee Se-dol’s one victory more valuable.

AI technology has already penetrated deep inside our lives. Apple’s Siri, Microsoft’s Cortana, Samsung’s S Voice, Google search, Facebook’s customized information, all serve as a virtual assistant. A taxi driver said, “You have to listen to the lady in and out of home,” as he follows the direction by navigation.

U.S. Defense Advanced Research Projects Agency, known for the development of GPS and Alpha Net, is developing AI, robots and drones for military uses. It is also developing small aircraft that can find and attack the target in an urban setting or inside a building. The automated weapons system warns of the fearful weapons revolution. The ethics of AI technology is likely to be an important task.
The World Economic Forum discussed the fourth industrial revolution this year. WEF founder Klaus Schwab said, “This fourth revolution comes on us like a tsunami.” How is this wave different from the three previous revolutions?

The first industrial revolution began in Great Britain in 1750 and continued to the early 19th century. Coal-powered steam engines and improved spinning machines led the automation of the cotton industry. But it was more of an improvement in existing industries. The real force was the bold entrepreneurship of taking a risk for future economic gains. The first industrial revolution is considered one of the three social revolutions of the 18th century along with the American Revolution and the French Revolution.

The second industrial revolution unfolded in new industries such as chemical, electric, petroleum and automobile industries from the 1870s. The technology hegemony moved from the United Kingdom to the United States and Germany. Here, large corporations emerged as the key technology innovation entities. In the process, system innovation of existing technologies occurred. And for the first time in history, technology innovation based on science was made possible. Here, Ford’s mass production and Taylorism of scientific management spread around the world. In the 20th century, a modern industrial society appeared as technology and production innovations changed the economy and society. Here, concepts of system, order and control emerged as core values.

AI, robot, the IoT, drones, virtual reality, 3D printing and driverless vehicles are at the center stage. Germany’s Industry 4.0 platform, the Industrial Internet Consortium of the United States and the Robot Revolution Initiative of Japan are leading the revolution. Recently, Germany is implementing a new production system with the IoT, and Korea can learn the strategy as the country grew upon manufacturing.
The transition of technology paradigm is unfolding in conjunction with changes of value and social system innovations. Just as Schwab predicted, the fourth industrial revolution will surely change the forms of industries, economy, employment, society and government. Rather than worrying about the reduction of jobs and technology development, we need to make efforts to seek multidimensional solutions by integrating technologies with the society. In the technological revolution period, we need to keep in mind that polarization and inequality between those who have and use technology and those who don’t grow wider. We need to predict the ranges and gravity of upcoming social changes and get ready with an effective and integrated perspective.