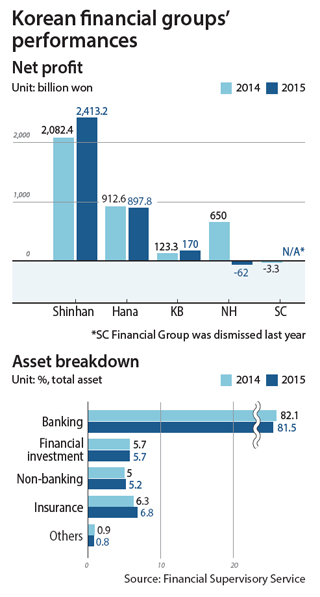 Local financial groups had mixed business performances last year as they fought to offset bad debts in the wake of massive corporate restructuring.

Shinhan Financial Group saw a net profit of 2.4 trillion won ($2.06 billion) last year, up 15 percent compared to a year earlier, according to the Financial Supervisory Service (FSS) on Wednesday. However, NH Nonghyup faced a net loss of 62 billion won during the same period as the balance sheet shaved off bad debt.

Other large groups, such as Hana and KB, enjoyed a net gain of 897.8 billion won and 170 billion won, respectively.

“The bad debt reserve accumulation standard is quite conservative, so each financial group may have faced a different outcome,” said an FSS official.

NH Nonghyup accumulated about 85 percent of the total bad debt reserve it lent. It was the only financial group that held its reserve below 100 percent of the size of bad debt.

Shinhan was the healthiest group by keeping its reserve of 191 percent, nearly double the size of bad debt, followed by KB and Hana.

At Korea’s major financial groups overall, the insolvent bonds accounted for an average 1.35 percent of total lending last year, down one basis point compared to a year earlier.

NH Nonghyup Financial displayed the highest bad debt ratio at 2.27 percent, followed by smaller financial groups based in regional areas like BNK of Busan and South Gyeongsang, JB of North Jeolla and DGB Financial of Daegu and North Gyeongsang. Each of the firms recorded the ratio at around 1.3 percent, which is below the average. Major groups like Hana, KB and Shinhan kept the ratio below 1.27 percent.

Shinhan Financial Group was the largest with the total asset of 370.5 trillion won, followed by NH Nonghyup, KB and Hana Financial Group. Standard Chartered Financial Group Korea was excluded from the 2015 data, as the group disbanded last year due to sluggish performance.

The banking business accounted for the largest part of the Korean financial groups’ assets, while the group’s non-banking and insurance areas keep growing.

Assets in the banking sector accounted for 81.5 percent of the total assets of seven Korean financial holding groups last year, down from 82.1 percent in 2014.