KDB to help boost projects that lead to saving energy

KDB to help boost projects that lead to saving energy 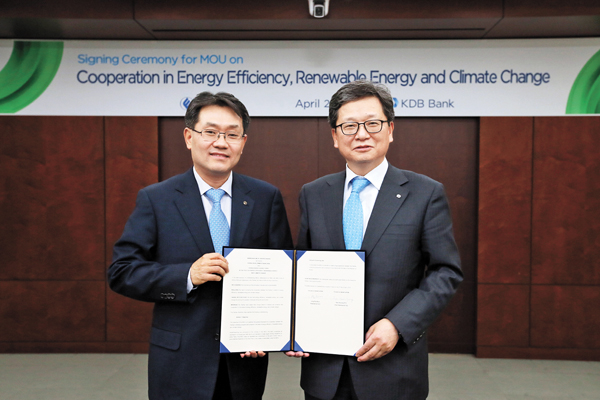 The Korea Development Bank (KDB) is stepping up its efforts to support new energy-related industries by clinching a handful of deals with relevant institutions.

The country’s largest public financier said on Wednesday it has signed a memorandum of understanding (MOU) with the Korea Energy Agency (KEA) to cooperate on projects to boost energy efficiency, develop renewable energy and establish measures to address climate change.

In line with the government’s initiative to create growth engines for the Korean economy, the bank signed similar deals with LG CNS, a leading provider of micro-grid solutions, and Hanwha Q-Cells, one of the largest photovoltaic manufacturers, to support the firm’s new energy-related businesses.

Such agreements have significance amid global efforts to reduce greenhouse gas emissions with a new climate change regime that was launched in Paris last December.

“KDB’s capability in offering financial investments as well as advisory and arrangement services is likely to create synergy when combined with the expertise of these institutions,” said Ryu Heui-kyoung, vice chairman of the bank. “Furthermore, the newly formed partnership is likely to enhance the global competitiveness of Korea’s energy-related new industries by facilitating the process for identifying new projects and markets at both home and abroad.”