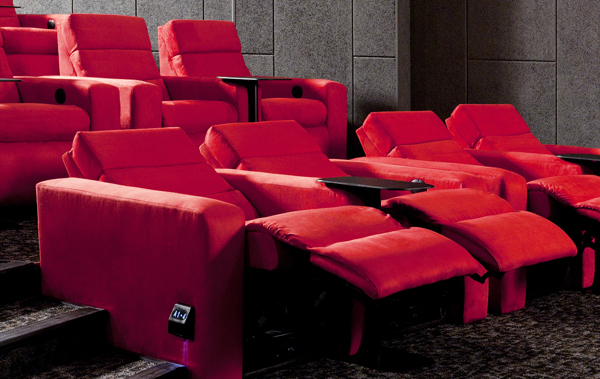 The CJ CGV Yeouido branch’s premium theater is equipped with spacious, soft seats that recline up to 180 degrees. [CJ CGV]

Anybody who has experience in an ordinary working environment in Korea has thought about escaping the office to sleep for just an hour at least a dozen times.

The wish becomes even more desperate this time of year when spring fever brings fatigue and drowsiness.

But there is good news for those working near Yeouido in western Seoul who are in great need of a high-quality siesta during working hours.

The Yeouido branch of CJ CGV, the largest theater franchise in Korea, has started to provide its premium theater, equipped with soft and spacious sofa seats that recline up to 180 degrees, to those who want to get some shuteye during their lunch break. The theater is located inside the IFC Mall.

Curious to see how effective it would be at relieving fatigue, this reporter visited the theater March 31 to experience the service firsthand.

In exchange for 10,000 won, the theater provides a sleeping kit that includes a bottled tea, a warm eye mask and a free coupon for two types of aromatic tea, which can be redeemed at the concession stand.

I was able to enter the theater 15 minutes before the session started and was attended to individually by one of the staff members, who kindly lead the way to my designated seat. She assured me to not worry about falling asleep too deeply because she would wake me up when the session is finished.

The theater has 96 seats, but patrons cannot lie right next to each other, so in the end only 48 people can use the service. It surely is a good idea because confronting an unfamiliar face sleeping next to you would be kind of awful, even in the dark. The seats are divided into male, female and couple zones. But the no-lying-next-to-each-other rule applies to couple zone as well. When I visited the theater, 30 people were using the service.

When the session began, the already dim lights turned off completely and the only light came from the small electronic candles situated next to each seat. They could also be turned off if desired.

It wasn’t easy to get comfortable at first because the seat squeaked whenever I moved. But what bothered me the most was the sound of people entering the theater belatedly and the staff explaining the same stuff.

A manager of the theater said they allow people to enter the theater for the first 15 minutes of the session. 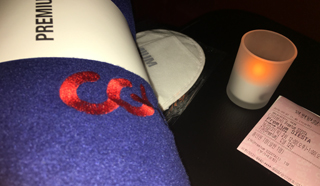 A blanket and slippers are among the items provided during the Siesta service. [JIN EUN-SOO]

But despite such trivial discomforts, a woman lying next to me as well as many of the male visitors started making soft snoring sounds as soon as the lights went out.

Nature sounds, including birds chirping and running water, played throughout the service.

In the end, I was able to doze off for about 10 minutes without much hindrance. If I wasn’t going to write a review about the service, I surely would have fallen asleep much more easily and deeply. And considering the additional service and goods that come with admission, the price seemed pretty reasonable as well.

People started to leave the theater about 10 minutes before the end, probably because they had to get back to their offices before their lunch hour ends.

One male visitor surnamed Yoon who works at a nearby office said he was able to get some good 30 minutes of sleep.

“I didn’t eat lunch just to come to this service,” said the 30-year-old, who was visiting the theater for the second time.

“Jimjilbang is one of the options for sleep during the daytime, but it causes a lot of hassle such as changing your clothes, but here you can just go straight in and get what you need,” he said, adding that he is willing to revisit the Siesta service at the same price tag.

Another female visitor who works at IFC Mall said although she wasn’t able to actually fall asleep, she was satisfied to “just lie there and relax” because there is no place to rest at her workplace. In particular, she was satisfied with the comfortable chair, but she thought the price was a bit high. She said she would try it again if it cost 5,000 won.

According to Woo Jin-hwan, the operations manager of CGV Yeouido, there are currently no plans to expand the service to other branches. “Because of Yeouido’s high concentration of offices, IFC Mall always bustles with office workers during lunchtime,” he said. He added that there are no plans to lower the price, either.

However, this month the theater is offering a 1+1 event where two people can enter for the price of one. The service runs Monday to Thursday and tickets must be purchased on site.