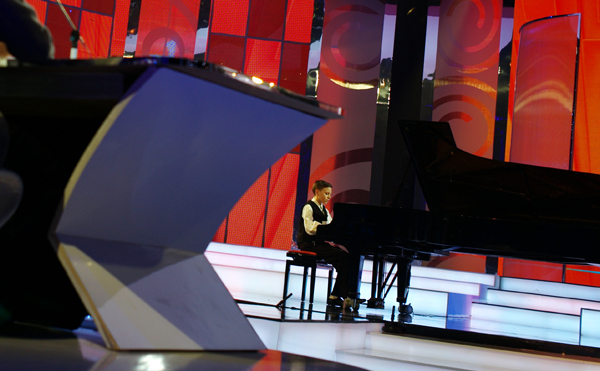 Young classical musician and competitor in the “Virtuosos” talent show Lajos Tamas Petres plays for the jury on a piano during the recording of the show in the studio of the Hungarian State Television in Budapest on Saturday. The creators of “Virtuosos” have signed a deal with Dick Clark Productions, producers of the American Music Awards and many other shows, to license the format of the successful program internationally. [AP/NEWSIS]

BUDAPEST - The latest hot new television creation: A Hungarian talent show for young classical musicians that is on the verge of being replicated around the world.

The creators of “Virtuosos” have signed a deal with Dick Clark Productions, the company behind the American Music Awards, to license the format of the successful Hungarian program internationally.

Dick Clark Productions said there’s interest in the show from China and Japan and the company is working on a deal with U.S. networks.

“We believe we may have a U.S. launch simultaneously with one of the other territories,” DCP executive Mark Rafalowski told The Associated Press. “There are very few things outside of sports that can attract a multi-generational audience. Youth competitions done right, especially music, are one of those things.”

Mariann Peller, creator and producer of “Virtuosos” and an experienced concert promoter, said she was motivated after noticing that few young people were listening to or performing classical music.

“I saw only gray hairs in the orchestra and the auditorium,” Peller said. “One of the aims of the program is to make classical music trendy.”

On a recent visit to Hungary, Placido Domingo praised “Virtuosos” for allowing young classical musicians the chance to compete in a type of program usually reserved for pop music.

In Hungary, the first season of “Virtuosos” was a huge hit for state television in 2014. Recording is underway for its second season - nine episodes lasting an average of 90 minutes, including a gala event. The 81 participants in the initial rounds came from over 2,200 musicians in three age groups.

In the first round, instrumentalists and singers perform solo or with minimal accompaniment. Semifinalists are backed by a chamber ensemble and this season’s finalists in each age group - those attending elementary school, high school or music universities - will have access to Hungary’s National Philharmonic Orchestra.

“Virtuosos” has also set up a foundation to assist the careers of the participants, not just the finalists, helping the musicians buy instruments and organizing some 300 concerts for them from New York to Tokyo.

“‘Virtuosos’ is different from other talent shows in that we have a mission,” Peller said. “We made it an objective not to let go of the children’s hands but to continue and build their careers.”

Future editions of the program aim to discover talents in jazz, world music, conducting and film score composition, among other categories.

The program has already expanded its scope, including performers with Hungarian roots from outside the country in the second season. AP