North has made progress with nukes: minister

North has made progress with nukes: minister 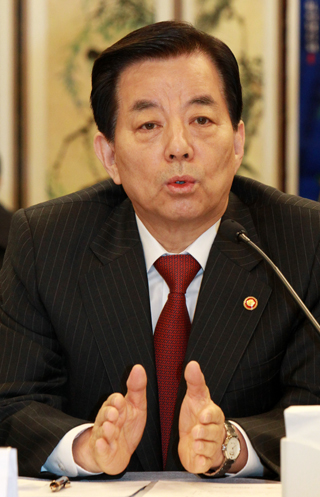 Pyongyang has made significant progress in the miniaturization of nuclear warheads, according to South Korean Defense Minister Han Min-koo Wednesday, who added that the North is also likely to deploy a new multiple launch rocket system as soon as this year.

It was a rare acknowledgement by the South Korean government of improvements in the North’s nuclear capabilities. Pyongyang makes regular claims that it has successfully tested key technologies essential to the construction of intercontinental nuclear missiles.

“North Korea can conduct a nuclear test any time through the decision of the leadership,” Han said in a joint interview with South Korean reporters, implying that a fifth nuclear test by Pyongyang is looming.

Han also said that the North has completed the development of a large-caliber multiple launch rocket system (MLRS), which is likely to be deployed at the end of this year.

This followed the latest assessment by the South Korean military of North Korean leader Kim Jong-un’s order on March 15 to carry out a nuclear warhead test and a ballistic missile test “soon.” Kim claimed a month ago that his country has succeeded in miniaturizing nuclear warheads to fit atop ballistic missiles. Under his guidance, North Korea recently conducted a test of the 300-millimeter (1-foot) multiple rocket launchers.

The defense minister said MLRS weapons are cheaper and can function as an alternative to the North’s short-range Scud missiles.

He underscored that South Korea can neutralize the North’s rocket launchers by monitoring them with unmanned aerial vehicles (UAV), counter-artillery radar and by destroying North Korea’s missiles with the South’s surface-to-surface missiles.

Han backed his assessment of North Korea’s nuclear capabilities by pointing out that 10 years have passed since its first nuclear test in 2006.

Based on other countries’ nuclear development timeline, he concluded that a significant amount of the technology needed to miniaturize a nuclear warhead has already been developed by the North.

On the deployment of the U.S.-led Terminal High Altitude Area Defense (Thaad) system in South Korea, the defense chief said, “From a military and security standpoint, we have to ensure the ability to protect our country… There are already two [AN/TPY-2] radars in Japan, and China does not say anything, but is pressuring us.”

Beijing has been particularly sensitive to the Thaad system because of the AN/TPY-2, a high-resolution, rapidly deployable X-Band radar designed to detect, track and identify ballistic missiles at long distances and very high altitudes. Beijing’s concern is that this technology could be used in surveillance operations against China.