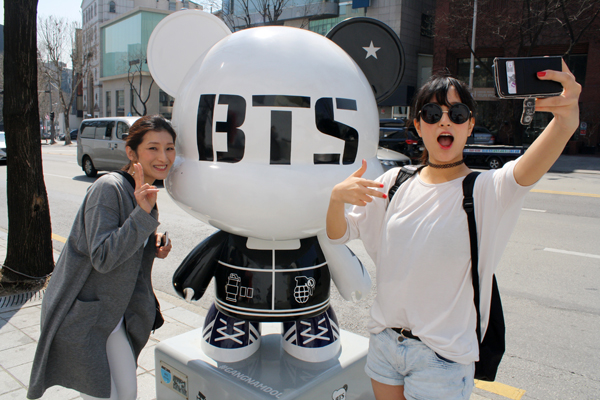 Step into a coffee shop in Cheongdam-dong and you can see for yourself what Psy’s “Gangnam Style” has done to the area. Customers, mostly groups of girls, chatter away in Japanese and Chinese while shop employees take their orders in English. But stay a while longer and you may begin to notice many of the people in cafes and restaurants seem to be eagerly peering outside at the streets.

“I came here as soon as my classes were over to get a glimpse of JYP Entertainment stars,” said Rui Feishan, a 29-year-old Taiwanese attending Korean classes at the University of Seoul.

In the few minutes we spoke, Rui kept her eyes glued to the windows.

“This place is packed from morning to night with foreigners who want to spot K-pop stars,” said a worker at the cafe.

The JYP Entertainment building sits not 10 meters (32 feet) from the coffee shop, which, perhaps to avoid any accusation of partiality, also provides directions to SM Entertainment and FNC Entertainment headquarters.

The coffee shop is not the only evidence of increasing tourists and K-pop fans in the area. In 2014, Chinese tourists spent some 26.3 billion won ($22.7 million) in the area, five times more than the 5.2 billion won they spent in 2012. 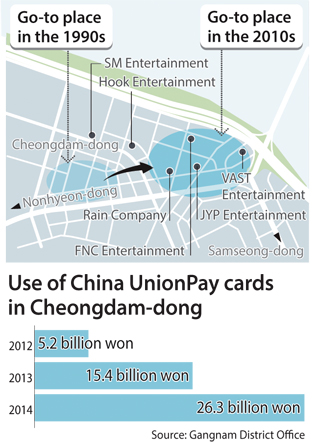 Once famous for being the place that started the brunch craze in Seoul in the late 1990s, this neighborhood gave its name to the luxuriously dressed women who came to be known as “Cheongdam-dong daughters-in-law.”

The area’s initial golden age ended when its skyrocketing rent prices drove out many shops, leaving only a few high-class Japanese restaurants and beauty salons scattered throughout the area by mid-2000s.

When tourists started to swarm into Gangnam District after Psy’s signature gallop-dance went viral in 2012, they revitalized the area but also changed many things.

But now that the area is well into its silver age, Cheongdam-dong attracts many foreigners hungry for Korean culture, music and food. Instead of boutique shops and high-class restaurants, visitors enjoy Korean comfort dishes like gimbab (Korean-style maki, or “sushi rolls”) and ddeokbokki (spicy rice cakes).

The go-to places in Cheongdam-dong have also changed. Harue, the American-style breakfast restaurant that insisted on providing a true out-of-the-country experience by using imported ceramics; Cafe de Flora, which experimented with valet parking service and was soon zealously imitated by other nearby cafes and restaurants; and Xian, one of the country’s fusion food pioneers, had all closed down by 2011.

Gangnam District Office is a strong sponsor of the new changes, renaming the street in front of Galleria Department Store last year as K-Star Road.

“Every fourth Friday of the month we plan to block a part of 79 Apgujeong Road that passes the JYP Entertainment building to host K-pop concerts and souvenir pop-up stores, developing the region into a ‘K-pop special economic zone,’” said Park Hee-soo, head of the tourist industry department at the Gangnam District Office.