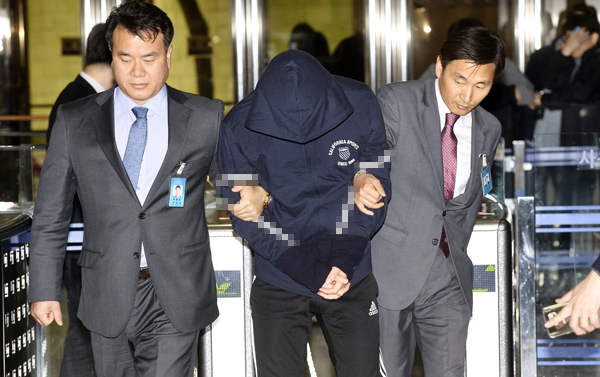 Police officers escort a man accused of breaking into the Central Government Complex in Seoul out of the National Police Agency on Wednesday to a court. A judge was set to decide whether to issue a detention warrant or not. [OH SANG-MIN]

The case of a 26-old-man who broke into the government complex in central Seoul several times last month to change his score on a government job examination has revealed lax security at government organizations.

The police said on Wednesday that the man, identified by the surname Song, stole identity cards of three government officials from a gym on the first floor of the government complex, and sneaked into the offices of the personnel management section of the Ministry of the Interior several times. The ministry is in charge of the test and selecting new government officials.

According to the police, Song broke into an office of the ministry on the 16th floor of the complex on Saturday March 26 around 9:05 p.m., hacked into a personal computer of a government official in charge of the test, and added his name to a list of successful candidates in an exam for Grade 7 positions, principal clerk level, that was given early March.
Song appears to have breached the offices several times before March 26th as well.

After the police received a report from the government last Friday, they investigated CCTV footage from the building and arrested Song on Monday in Jeju, where he attends a university. He is currently under police investigation.

“We feel grave responsibility that the government complex was breached even during a terror alert period,” Kim Sung-lyul, deputy minister of the Ministry of the Interior told reporters. “We haven’t fully understood the specific situation.”

The government vowed to overhaul its security in the wake of the incident, forming a team to strengthen the security of the government complex. Deputy minister Kim will head the team, and other ministries and private security experts will participate.

Song, who has studied for the test for almost three years and delayed his graduation from university, tried unsuccessfully to steal the test before it was administered, police said. That was one of his earlier breaches of the ministry office, although police didn’t specify the date.
After he took the test, he realized he hadn’t passed. He breached the ministry offices once again to change his score, hacking into its computer with programs he brought along on a USB drive. When police asked Song, how he could knew which computer to hack into, Song said he determined from a government website which official was in charge of the test. Police were not sure whether to believe that or whether he had an inside accomplice.

The Government Complex-Seoul, where it is not far from the Blue House, has key government offices including the Prime Minister’s office, Ministry of Unification and the Ministry of Interior. In order to get into an office in the 19-story building, one has to pass at least three security checks: at the front door, a metal detector and a so-called speed gate to check identity cards.

Without an identity card, a visitor must be accompanied by an official who works at the one of the ministries.

Government officials said the most curious part is how he knew the numerical passcode of the front door of the ministry’s offices, which raised suspicions of whether he had an inside accomplice.

The police couldn’t confirm whether Song worked alone or with an accomplice but said it will investigate. No government officials were charged in the case so far.