Average Korean bride is now out of her 20s

Average Korean bride is now out of her 20s 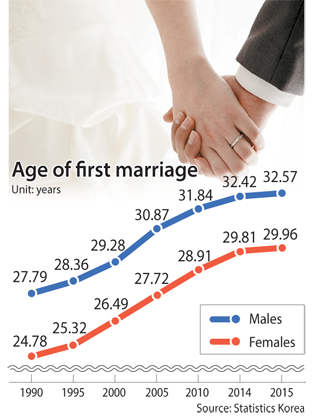 The average age of a Korean bride last year was 30 - the oldest ever.

And the marriage rate fell to the lowest rate since the government started compiling data in 1970. Only 5.9 people out of every 1,000 got married last year compared to 9.2 in 1970.

According to Statistics Korea on Thursday, the demographics of marriage continued to deteriorate last year as the economy struggles, young people have trouble finding jobs and more women decide to pursue careers - which is still considered incompatible with getting married and having kids in Korea.

A shrinking pool of young people in their 20s and 30s was also cited as a contributing factor.

The study showed that women continue to put off their weddings.

“This is the first time for the average age for brides to reach 30,” said Lee Ji-yeon, a director at Statistics Korea. “And the number of women marrying in their early 30s doubled over the last ten years.”

Last year, women married at the average age of 30, 73 days older than the 29.8 average of the previous year. Men have also been putting off starting a family. Their average marriage age rose to 32.57 last year from 32.42 the year before.

The average age for grooms was oldest in Seoul, 33, and youngest in Ulsan, 32. Women in Seoul topped the list at 30.8, while brides in South Chungcheong were the youngest at 29.2. 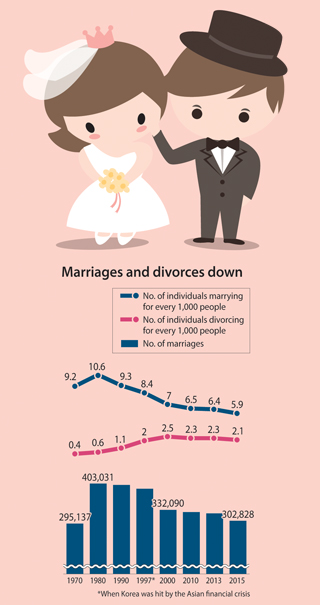 Another Statistics Korea report released last month concluded that young people are less interested in marrying or having children, and that is driving up the number of people living alone. The unemployment rate for Koreans aged 15 to 29 in February hit a historical high of 12.5 percent. Most Koreans don’t marry until the man has a solid income and enough money to afford an apartment.

A contraction in the number of international marriage in Korea also plays a part in the statistics. Koreans marrying foreign nationals only accounted for 7 percent of all marriages last year, down 8.8 percent from the previous year.

“The government toughened regulations on international marriage brokers in 2013, and started to ask foreign nationals to take Korean language exams when they apply for marriage visas starting in 2014,” said Lee. “Additionally, the government allowed ethnic Koreans living in China to receive temporary working visas, and these people felt less of a necessity of getting married to Koreans to come to Korea.” 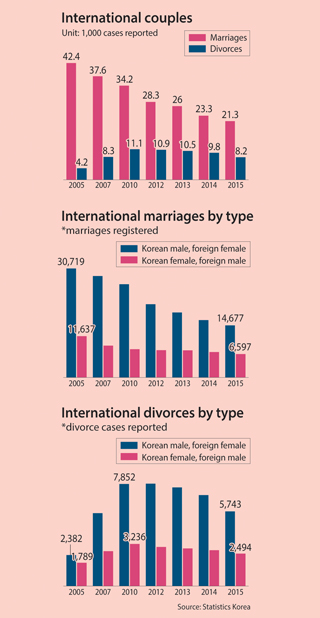 Another notable change in recent years is that more young men are marrying older women. The ratio of grooms marrying older brides in first marriage last year reached 16.3 percent. The figure has been rising since 2011.

The ratio of women marrying older men has fallen during the same period.

While the marriage rate has been falling, the divorce rate fell to its lowest level in nearly 20 years. Out of every 1,000 people, 2.1 couples ended their marriages last year. The last time the rate was at this level was in 1997 when the country was hit by the financial crisis when people were too scared of their financial security to divorce.

The study also found that the longer a couple has lived together, the more likely they are to divorce. Some 30 percent of the couples that divorced last year had been living together for more than two decades.

By region, the marriage rate was the highest in the nation’s administrative city of Sejong, where 8.2 people in 1,000 wed. Seoul was in second place with 6.5 people while Ulsan came in third with 6.4.