Park Jun-sung, the chairman of the Minimum Wage Council, gives a speech at the meeting held at Sejong Government Complex, on Thursday. Three parties, including labor, employers and the government met on Thursday to discuss the nation’s minimum wage for next year. [NEWSIS]

Negotiations to determine the increase in the nation’s minimum wage for next year began on Thursday amid high tensions among labor, employers and the government.

Prior to the start of the talks at Sejong Government Complex, labor representatives demanded that employers and the government raise the current 6,030 won ($5.22) minimum wage per hour to 10,000 won. Employers want to keep the minimum wage at the current level.

The three parties, consisting of nine representatives each, need to agree to a final increase and submit it to the Ministry of Employment and Labor by June 29. The ministry will announce the new level for next year by Aug. 5.

According to experts, the key question in this year’s negotiations is not how much the minimum wage should be, but how to calculate it and who is going to be affected.

By law, the minimum cost of living should be 471,201 won per month for a single-person household. Households earning less than that are subject to government subsidies and are classified as the lowest income bracket.

Korea’s minimum wage system mandates employers to pay wages higher than the prescribed level every year. All employers with more than one employee must comply with the minimum wage law.

Korea has the highest ratio of 18.2 percent of people collecting the minimum wage among member countries of the Organization for Economic Cooperation and Development. France’s ratio is 10.8 percent. Britain and the United States have 5.3 percent and 3.9 percent each. 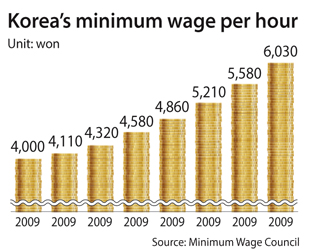 According to a report by Yoo Gyeong-joon, commissioner of Statistics Korea, about 65 percent of workers collecting the minimum wage are not from low-income households. The commissioner wrote the report when he served as a researcher at the Korea Development Institute.

“The figure can be interpreted that some financially secure people are receiving minimum wage incomes to afford extra spending,” said Kim Dong-wook, an official at the Korean Employers’ Federation.

Kim said the minimum wage concept has been widely misunderstood. The original idea of the legal minimum wage is to set the minimum level for government subsidies for households in the lowest income bracket.

“The minimum wage is being used as a guideline for wages of part-time workers rather than being a standard for subsidies,” Kim said. “Some even get confused about part-time wages with the minimum wage.”

The government and employers are considering offering households in the lowest bracket with income tax credits as a supplementary measure along with the minimum wage.

They are also reviewing a plan to set different levels for the minimum wage for each industrial sector. The OECD recommended a similar measure for Korea last year to keep households from poverty.

The three parties will discuss what is included in the minimum wage. In many other countries, incentives, accommodation fees for foreign workers, meal and family-raising costs are considered when calculating the minimum wage. However, Korea’s minimum wage is close to the basic pay in terms of its composition.

According to the OECD, Korea’s minimum wage is 45.8 percent of the country’s median wage, which is 18th largest among the members.