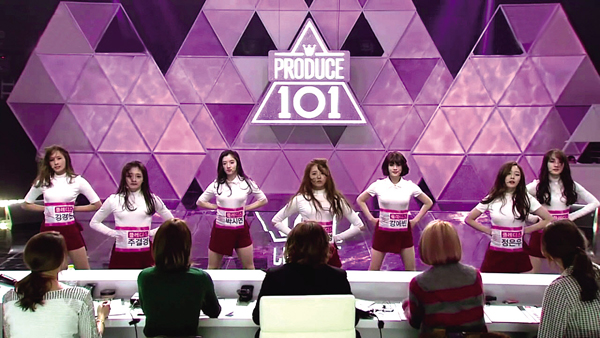 The popular Mnet program “Produce 101” that just ended featured 101 female trainees from 46 local entertainment agencies who competed for a spot in a K-pop group. [SCREEN CAPTURE]

“Produce 101,” an audition program in which 101 female trainees from 46 local entertainment agencies competed to become part of a new K-pop group, just ended after a three-month run.

The popularity of the show, with its fresh format of featuring as many as 101 participants and its human-based approach, almost eclipsed that of the perennially loved “Infinite Challenge.”

Riding the coattails of hit show, the girl group formed by the final 11 contestants, I.O.I, is off to a flying start, with many privileges that other fledgling singers could only dream of starting their careers with.

However, the group is made up of singers that were practically chosen by the fans and is only intended to stay together for a year. There are many factors that need to be considered before prematurely predicting the group’s fate.

I.O.I has a status that is already built in. Recognition from the public, as vital as it is for all celebrities, let alone for those who just came onto the scene, is hard-earned. Experts say that it conventionally takes artists more than three albums to earn any sort of recognition in the music scene. But that of I.O.I is almost at the level as that of top K-pop stars.

Thanks to the unique format of the show, every finalist made her own name to some extent.

“My five-year-old idol group still does not have the level of recognition I.O.I is beginning their career with,” said a manager of another group. “It took about 3 billion won [$2.6 million] just to produce a couple of albums, and it requires whole lot more than just albums to earn recognition. I.O.I already has it, thanks to the show.”

The individual members of I.O.I belong to a total of eight different agencies, including Fantagio, Jellyfish and Pledis. As the saying goes, too many cooks may spoil the broth. The limited time frame of the group is another factor that will likely be a detriment to their success.

Even if the group succeeds, by this time next year the group will have already been dissolved. Due to the group’s longevity, or lack thereof, any sort of long-term plans or investment are just impossible. Taking detours or roundabout measures are not an option since the group only has limited amount of time to capitalize on.

Proposals and invitations began flooding their way even before the group was finalized. For a group with such short a life span, this will be a once-in-a-lifetime opportunity.

The music industry is putting the group on a pedestal, which is historically rare for a group yet to make any sort of mark on the scene. Reportedly, there are more than 10 endorsement offers on the table, three of which are being discussed positively. The group is being treated in much the same fashion as some big-name celebrities.

The biggest job for the group now is ingratiating themselves with the major broadcasters: KBS, SBS and MBC. The high viewership rating of “Produce 101,” which aired on Mnet, obviously came at the expense of ratings for other broadcasters. As one of the repercussions of the show’s success, the group is being given the side eye by major broadcasters.

“One of the three major broadcasters said they will consider casting the group once they prove their legitimacy,” said a representative of I.O.I’s agency. “Finding a way to put the group on mainstream TV as early as possible would be the key to its fruition.”