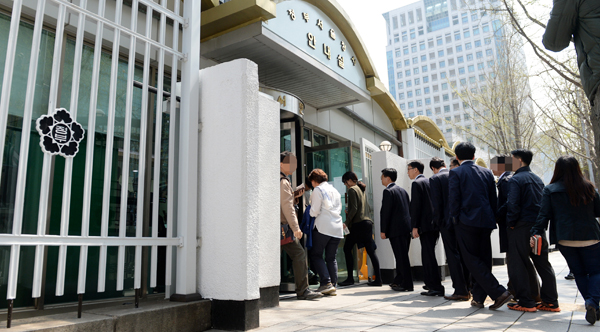 The Central Government Complex in Seoul tightens security on Thursday after a civil service test taker broke into the office several times with ID cards he stole. [NEWSIS]

The police tentatively concluded Thursday that the 26-year-old man who broke into the Central Government Complex in central Seoul several times to change his score on a government job examination didn’t have an insider accomplice.

But he did benefit from insider carelessness. The reason the man was able to penetrate the office of the personnel management section of the Ministry of the Interior was because the security doorcode was scrawled on a wall next to the keypad-access door.

And at a briefing Thursday, police said government officials tried covering up its embarrassing laxness.

According to the police, an official at the Ministry of the Interior in charge of security management ordered cleaners to erase a security door code written on the wall of the office before the case was reported on April 1. That’s when the ministry told police that a computer was hacked and a test score of the man, identified by the surname Song, was changed.

The police said it was likely that maintenance workers scrawled the door code on the wall so that they could get in to clean the offices.
The minister and deputy minister of the so-called Ministry of Personnel Management have not responded to phone calls from JoongAng Ilbo reporters.

Song, who has studied for the test to select new government officials for almost three years and delayed his graduation from university, visited the government offices five times before and after the written exam for Grade 7 positions that was given March. 5.

The police said his attempt to break into the complex was on Feb. 28, when he tried unsuccessfully to steal the test before it was administered. He got past the front gate of the complex by blending in with a crowd of policemen returning from leave on a Sunday afternoon.

In order to get into an office in the 19-story building, one has to pass at least three security checks: at the front door, a metal detector and a so-called speed gate to check identity cards. Without an identity card, a visitor must be accompanied by an official who works at one of the ministries.

For his first attempt on Feb. 28, he stole an identity card from a gym on the first floor of the government complex but couldn’t get into the 16th floor office since he didn’t know the doorcode.

After taking the exam, Song knew he had performed poorly. He again went to the government complex three times in March – on the 6th, 24th, 26th - and once on April 1. He acted like an official by using several more identity cards he stole from the gym and wearing open-toe sandals, as many Korean office workers do during the day.

After he took the exam, he could break into the office on March 6th and 24th, but failed to hack into a computer that contained the test scores.

On March 26, he breached the section’s offices, hacked into its computer with programs he brought along on a USB drive that could delete CMOS passwords, a level of security that is activated after a computer is turned on and before an operating system such as Windows loads.

At the end of March, the personnel management ministry reposted an announcement of qualifications for the exam on its website, a usual procedure. But Song thought his hacking had been discovered.

On April 1, he wanted to get into the office to check the computer file and see if he had been caught. But the door-code on the wall had been erased and he couldn’t get in.