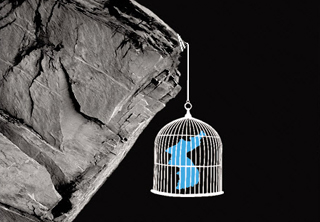 A month has passed since the UN Security Council slapped a broad and tough array of sanctions on North Korea to cut off funding and shipments for its weapons program following its series of nuclear and long-range missile tests. But the news of North Korea’s augmented threat and sanctions soon died out, overwhelmed by the historic match of machine versus man in the game of Go, which took place in Seoul last month, followed by the campaign season ahead of the April 13 general election. When searched for in Korean portals, “North Korea” news fell by half in March. Meanwhile, the word “nomination” doubled. North Korea hardly comes up on the campaign trails of both ruling and opposition party candidates. Policies on North Korea do not make it on the list of election platforms of the ruling Saenuri Party or splinter opposition People’s Party, posted on the National Election Committee website. The main opposition Minjoo Party of Korea listed North Korea at the bottom of its platform, tweaked slightly from the version before the fourth nuclear test. South Korean politicians have erased the North Korean problem as fast as Google DeepMind’s algorithm AlphaGo’s learning skill. Political parties are seriously neglecting their line of duty if they take the North Korean problem, which can determine the fate of the Korean peninsula, so lightly.

It remains uncertain how much China will comply with the trade and funding sanctions on North Korea. From the media materials provided by the Korea Trade-Investment Promotion Agency, and a Google search, it seems about 73 percent of the new UN sanctions have proven effective, while 27 percent have not. On Tuesday, the Chinese Ministry of Commerce announced a ban on imports of coal, iron ore and other commodities from North Korea in compliance with the international sanctions. But conditional imports can continue if the Chinese importer can present documented guarantees that the payment would be used for private causes and be approved by Beijing authorities. According to Daily NK, the online medium devoted to news on the reclusive state, overall market prices remained steady in North Korea regardless of the sanctions. It may be too early to determine the effect of the sanctions, which were declared last month. Sanctions require rigorous rationalization of limited resources in order to fight the uphill battle. According to a case study on the effect of 174 economic sanctions imposed on states throughout the 20th century by Gary Hufbauer and his co-authors, sanctions were partially successful in 34 percent of all cases and less likely to work on hostile autocratic regimes.

At the current stage, it is important not to be too harsh on North Korea. First of all, asking Pyongyang to come to the negotiating table without any conditions attached is drastic. Proponents for dialogue claim sanctions have not worked well and insist that diplomatic dialogue is a better option. But North Korean leader Kim Jong-un would hardly come to the talks in earnest when sanctions barely weaken his regime. Going back to the all-giving, all-tolerant engagement policy could be questionable when Pyongyang is incessantly advancing its weapons capabilities. We must ponder first how we aim to solve the nuclear issue when an inter-Korean relationship is restored through resumed dialogue. Entering talks without any breakthrough in this conundrum is like deluding ourselves to regard Kim Jong-un as an unreservedly good person, regardless of his being a dictator.

Another extremity would be pushing North Korea into a corner, to the point of breaking up the regime. This option is argued by hardliners who claim that the nuclear issue can only be solved by unifying the two Koreas. But no economic or trade sanctions have helped tame or crumble a state. It is propagandist to claim the Soviet Union collapsed from economic sanctions enacted by the United States, or the cost of a reckless arms race with its Cold War archrival. Sanctions had not disturbed the Soviets greatly and defense expenditures towards the end of the Soviet age rose 1 percent to 2 percent against the gross domestic product of the past. Socialist dictatorships crumbled mostly from implosive uprisings and popular movements rather than outside forces. Sanctions played a part, through decades of steady work, but a breakdown of the North Korean regime as it now stands would be too costly for us to handle.

The talk of a breakdown in Pyongyang may be designed to justify the sanctions and draw more support for them. But that thought, too, is dangerous. If the public believes too much in the effect of sanctions, they are likely to go against any form of dialogue. The study on sanctions recommends policymakers “not to bite off more than you can chew.” They can be tempted to inflate expectations of what sanctions can achieve. But the government must set a more realistic goal of what it seeks to accomplish from sanctions and keep the public informed of the procedures and hoped-for outcome. Sanctions are easy to levy and hard to lift. By July or August, we will know what the sanctions have cost North Korea through trade and market pricing data. The government’s policy performance on North Korea would be determined by then. In order to boost the effect of the sanctions, the government must play a more active role in overseeing their implementation, and consider forming a group of experts to advise on this. Envoys should be named for closer coordination with China by persuading Beijing that it cannot achieve its desired influence or peace in Northeast Asia without winning the hearts of Koreans. And the people must keep the North Korean issue in mind when making their choices of representatives and parties in the upcoming election. North Korea is pivotal to our future.