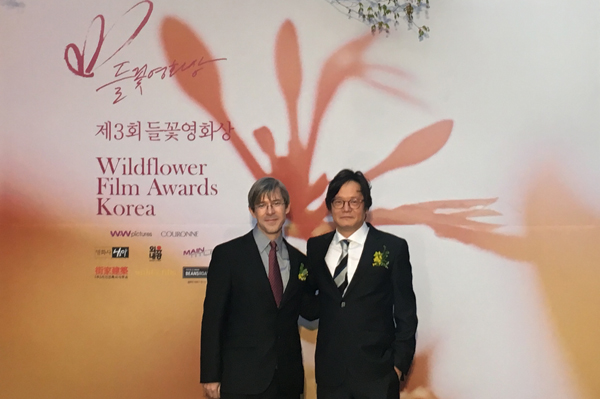 The Wildflower Film Awards Korea, which just held its third edition, has given out 14 trophies to filmmakers and films that contributed to cultivating Korea’s independent cinema last year.

Park Jung-bum’s “Alive,” a poignant survival story of a laborer, won the Grand Prize at the ceremony that took place on Thursday evening in Seoul.

Directors Shin Su-won of “Madonna” and E Il-ha of “A Crybaby Boxing Club” were granted Best Director awards for the narrative and documentary sectors, respectively.

For Best Actor and Actress, Jung Jae-young of last year’s Locarno winner “Right Now, Wrong Then” and Lee Jung-hyun of “Alice in Earnestland” took the trophies.

Kwon So-hyun, who has her roots in theater, won Best New Actor, for her portrayal of a mysterious streetwalker in “Madonna.”
“Scary,” directed by Yang Byoung-khan and starring Gu Yun-hee, won the Special Achievement Award. The offbeat film achieved the unprecedented feat last year of expanding its number of screens weeks after its initial release due to word-of-mouth hype.

“A well-made film is like a present to me,” Paquet said at the ceremony. “All the staff and actors are gifts, and I think this event is not a place to compete but an opportunity to thank everyone.”