Allianz sold to Anbang for $3M

Allianz sold to Anbang for $3M 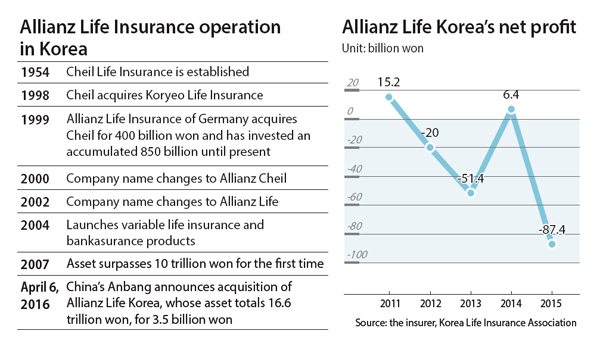 The acquisition price, revealed a day after the deal was announced, sent shockwaves across the Korean financial community, given that Allianz Life Insurance is currently the country’s 11th-largest insurer with assets over 16.65 trillion won.

Allianz Group spent 400 billion won to acquire the company in 1999 when it was Cheil Life Insurance and the industry’s fourth-largest firm. It has since carried out seven stock issuances amounting to 850 billion won.

Alliance Life has yet to elaborate on the reasons for the low price, and no one from the company was available for comment.

“I heard the news about the acquisition price, but I couldn’t trust whether or not the number is true,” said an analyst in charge of the insurance sector at one of Korea’s top three brokerages who requested anonymity. “The $3 million is impossibly small considering the price suggested at the first bidding and considering the value of the firm’s license [as the Korean government doesn’t grant a life insurance business licenses anymore].”

The analyst speculated that the Korean office must have massive amounts of bad debt and insolvent assets.

Allianz Korea has struggled with falling income from insurance premiums and net profits.

The company’s assets rose 4.3 percent last year to total 16.65 trillion won, according to the 2015 business report unveiled last week. But of those assets, liabilities accounted for nearly 94 percent, or 15.65 trillion won, while the company only had capital of about 9.9 trillion won.

The company has posted net losses in eight of the 17 years since its acquisition by Allianz Group.

“Liabilities expanded last year as we found the company needs to place more money in reserves for insurance payouts,” the company said.

Industry insiders say that Allianz must have decided on a cheap sell-off, as its products with long-term contracts and high interests rates of between 7 and 8 percent that it has sold the past few decades have continued to take bites out of its margins.

The industry estimates that Allianz Korea still has about 600 billion won in liabilities to pay out.

It has also fallen behind its competitors when it comes to winning new contracts. In January alone, the firm has only made about 956,400 new contracts, down 2.1 percent compared to the previous month.

As the size of its liabilities expands, Allianz Korea has seen its risk prevention allowance continue to shrink.

The financial regulator has set the risk-based capital (RBC) ratio requirement at a minimum of 100 percent of the potential risk value to handle any problems that could occur from deficit operation, bad debt or an excessive surge in insurance payouts.

Allianz Korean office had faced its RBC ratio falling to 183 percent, which is lower than the life insurers’ average at 297 percent as of last year, according to the Financial Supervisory Service.

The firm’s RBC ratio hit 217 percent in 2013 but has declined since, and industry insiders speculate that the German insurer had to issue additional securities worth at least 100 billion won to reach that figure.

Another factor of the German insurer’s cheap sell-off was the new capital requirement pushed by the European Union called the Solvency II Directive, the industry insiders said.

Starting this year, the capital requirements for all European life insurers will be calculated taking into account estimated losses for the next 12 months, forcing them to keep more cash in reserves.