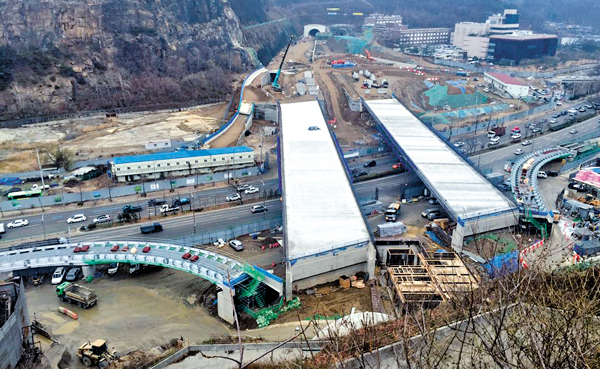 Construction on the Gangnam beltway in the final stages. The beltway, set to open in May, will connect Siheung-dong in Geumcheon District, Seoul, to Umyeon-dong in Seocho. [JOONGANG ILBO]

There’s a famous saying in the Korean real estate industry that money flows in the direction of the road.

It means that if you want to profit from real estate investments, make them in areas where new roads are being built.

Any type of transportation infrastructure, whether a subway line or a new highway, is considered a positive factor in real estate investment.

When a new subway is built or an intersection created, more people are drawn to the region and real estate prices in the surrounding area rise.

“Real estate value in a new traffic area rises between 5 and 10 percent before infrastructure is opened to the public and rises 10 to 20 percent more when the service begins,” said Park Dae-beom, an official at Taekyung Partners, a company that specializes in real estate asset management. “Investors who purchase property are usually particularly interested in these kinds of areas.”

This year in particular, there are many roads and subways that are either already built or scheduled for construction in the southern parts of the greater Seoul area.

One example is the extension of the Sinbundang Line that opened Jan. 30. The line connecting Jeongja-dong in Bundang, Gyeonggi, to Gangnam, Seoul, opened in 2011. It now extends to Suji in Yongin, Gyeonggi and Gwangyyo New Town in Suwon, Gyeonggi.

More subway stations are being added along the extension, and the Ministry of Land, Infrastructure and Transport recently announced that it will further stretch the line to Samsong District in Goyang, Gyeonggi.

If all goes as planned, a new subway line will be created to connect the southernmost region of the greater Seoul area to the northernmost, passing through the center of the capital.

After the announcement, the prices of houses located in nearby neighborhoods with limited access to major public transportation have been rising.

An extension connecting Incheon to Suwon also opened at the end of February. In the process, four new subway stations -- Inha University, Sungeui, Sinpo and Incheon Stations were formed.

With the newly extended line, passengers can travel from Incheon Station to Oido Island in Siheung without having to transfer trains.

A new road passing through the southwest region of the greater Seoul area is also under construction. The 27.38-kilometer highway connecting Suwon, south of the capital, and Gyangmeyong, on the western edge of the border between Seoul and Gyeonggi, is currently under construction and is expected to open later this month. 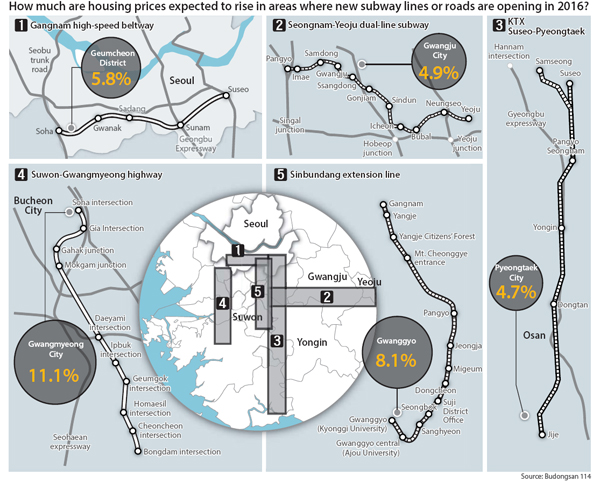 Once opened, travel time between the two cities will be reduced from 35 minutes to 15 minutes.

A double-track line connecting Seongnam, Gyeonggi and Yeoju, Gyeonggi, which will pass through Yeoju, Icheon and Gwangju, Gyeonggi, will also be reopened for the first time in 10 years. Eleven stations are expected to be in service by June.

The line will pass through Pangyo on the Sinbundang Line as well as Imae Station on the Bundang Line and then to Samdong, Gwangju, Ssangdong and Gonjiam of Gwangju, as well as to Sindun, Icheon and Bubal in Icheon.

The area expected to benefit the most from the Seongnam-Yeoju line is Gwangju. The region has had the reputation of being a metropolitan area in name only, as it is largely disconnected from other major cities within Gyeonggi because of its lack of public transportation. In order to travel to neighboring Bundang’s new town, Gwangju residents were required to drive about an hour.

Once the line is opened, passengers will be able to travel from Gwangju to Gangnam District in just 30 minutes.

In August, a high-speed KTX line traveling from Suseo in southern Seoul to Pyeongtaek, Gyeonggi, is scheduled to open. The train will pass through Dongtan, Gyeonggi. Once the train is in service, it will take only 20 minutes to travel from Suseo to Pyeongtaek.

Seoul’s first light rail will travel from Ui-dong in Gangbuk District, passing through the Jeongneung and Sungshin Women’s University Stations on Line No. 4, and Bomun on Line No. 6, before arriving at Sinseol-dong in Dongdaemun District. This will cut the travel time from an average 50 minutes down to 20 minutes.

The Gangnam high-speed beltway is also currently under construction.

The 12.4 kilometer section of the road that connects Geumcheon District, considered one of the most notoriously inconvenient neighborhoods in Seoul when it comes to public transportation, with Seocho District, while passing through Gwanak District, will be funded by private investors.

The Seoul metropolitan government is responsible for the section from Seonam to Jooam-dong in Gwacheon, ending at Suseo.

The privately funded section is expected to open next month after being under construction for eight and a half years. Once the road opens, it will take roughly 30 minutes to get from Geumcheon District to Gangnam District, or about half the current time.

But just because a new road or subway line is being built doesn’t necessarily mean property values in the surrounding areas will automatically shoot up.

Experts say construction usually takes a minimum of five years and can stretch to as long as 10, so investments are not ideal for those looking to make a quick buck. Some also point out that only areas in the immediate vicinity of new subway stations or roads will see their property values rise, rather than the region in its entirety.

Others urge caution when it comes to the type of property people choose to invest in near new infrastructure.

“If you’re purchasing older property right before a new station or road opens, your purchasing price already includes the benefits from the newly built road or subway station,” said Chung Yoen-shik, vice president of iNEX Housing, which specializes in marketing for pre-sales of apartments before their construction.

Further, only the areas in which access to public transportation was most limited will see truly significant increases in property values.