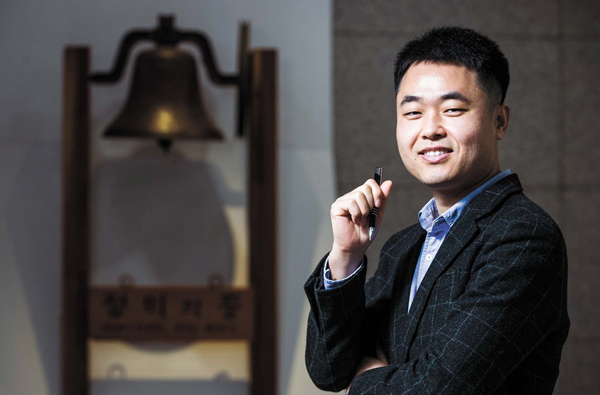 The first North Korean defector to make it into law school, 30-year-old Lee Seo-jin (feigned name) stands in front of the Bell of Justice at Seoul National University School of Law. [PARK JONG-KEUN]

The first North Korean defector to make it into law school, 30-year-old Lee Seo-jin (feigned name), described himself as the poorest of all “dirt spoons,” a term used to refer to people that have no inheritance from their parents.

Lee crossed the Tumen River with his mother to leave for China in 1999, the hungriest time of one of North Korea’s worst famines. He was only 14 years old then. His birthplace, Hoeryong of North Hamgyong Province, “was filled with dead bodies on the street whenever I stepped out of my house,” he recalls.

In October 2003, Lee entered South Korea, closing the chapter on his difficult time in China. In the South, he completed qualification exams for elementary and middle school courses and entered a school in Busan for alternative education.

Alternative education, which began in the 18th century as a reaction to standardized education, was first promoted by the likes of Jean-Jacques Rousseau, Ralph Waldo Emerson and Henry David Thoreau, and includes anything outside mainstream pedagogy: programs for the gifted, the intellectually challenged, students with behavioral issues or those with unusual histories.

After that, Lee made it into the department of economics at Korea University, one of the nation’s most prestigious universities.

In 2013, he became the first North Korean defector to make it into Seoul National University School of Law through a special admission process made for students in vulnerable social groups. This year marks Lee’s third year in law school. To prepare for the bar, which will take place early next year, he studies day and night, sleeping only four hours a day.

As his story was delivered to the public, a nonprofit foundation under the law firm Shin & Kim volunteered to support half his school tuition, which is 6.67 million ($5,783) per semester until he takes the bar exam. Kim Yong-dam, the Kim of Shin & Kim and formerly the nation’s chief justice, visited Lee’s school in April 1 to encourage him.

“Young people in South Korea call the country ‘Hell Joseon’ but I only half agree with their assessment,” Lee said. “The country is still a place where dreams can come true by effort.”

The term Hell Joseon has been used among youths as a way to express the severity and difficulty of life in Korea.

One of the things that shocked Lee right after his defection in March 2004 was the impeachment of late President Roh Moo-hyun.

“In the North, the law is only a means to support the decision of the leading party but I was surprised to see people in South Korea denounce the head of the country through legal procedures,” he said. He also noted the Constitutional Court’s decision to name adultery unconstitutional last year as another situation in the South that surprised him.

But despite the benefits he now enjoys, life here is difficult in certain ways.

“Law schools give grades on a curve and so it is not easy competing with South Korean students who have received a good education since childhood,” Lee said. In fact, he was put under academic probation in the second semester of his freshman year due to his low grades.

“It has become my habit since then to skip lunch and study,” he added. “I can’t be lazy because with low grades, my scholarships will be cut off.”

Every semester, Lee is supported with about 10 million won from the school and external agencies so he can pay for his dorm room, tuition and cover living expenses.

When asked about the argument that law school serves as a way for the nation’s upper class to pass on their power and wealth to their next generation, Lee shook his head and said, “People like me are still at the school.”

“If I become a lawyer I want to work for human rights of North Koreans as well as unification,” he said. “I know it sounds like a joke but I sometimes think of becoming a public peace prosecutor.”