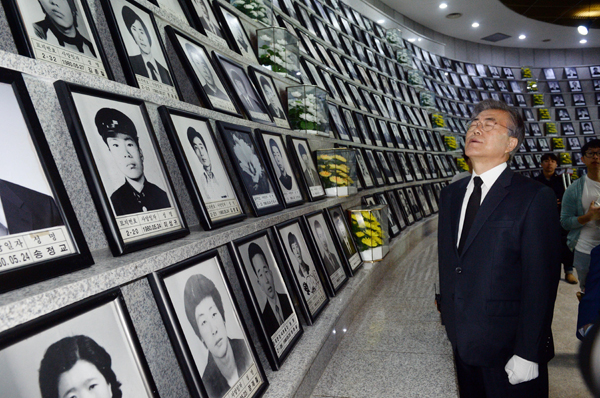 Moon Jae-in, former chairman of the main opposition Minjoo Party, observes the memorial portraits at the May 18th National Cemetery on Friday. [NEWSIS]

The main opposition Minjoo Party’s Former Chairman Moon Jae-in announced Friday that he will not run for presidency if he cannot secure support from the Honam region.

“If the people of the Honam region decide to withdraw their support from me, then I will step down from politics with no regrets,” Moon addressed the crowd in Chungjang-ro, Gwangju.

“I will not be running for presidency in that case,” he added.

Moon’s decision in January to step down from the Minjoo Party chairmanship had been criticized by some ruling Saenuri party lawmakers as a strategic move intended to aid his run for presidency. Reminding the public of his resignation, Moon beseeched the people to not give up on the Minjoo Party’s new candidates.

“Since I have stepped away from the chairmanship of the Minjoo Party,” he said, “the party is teeming with new talents. Please do not give up on them just because you are disappointed with me.”

Moon emphasized that the Minjoo Party is “the only party able to win the battle against Saenuri Party and bring about government change,” repeating his conviction in an interview after the speech by saying, “It will be a national disaster if the ruling party wins the majority.”

The liberal opposition has never lost control over Honam region, which includes Gwangju and North and South Jeolla.

The opposition party experienced a split last December when Ahn Cheol-soo defected from the main opposition New Politics Alliance for Democracy (NPAD), the precursor to the Minjoo Party, and established the People’s Party. Reps. Ahn and Moon were co-chairmen of the NPAD before the split.

On Wednesday, just a week before the April 13 general election, the Minjoo and People’s Party leaders both declared they were abandoning any attempt at an alliance to field single opposition candidates in races to avoid splitting the liberal vote.

In apologizing for coming “too late” to visit the Honam region, Moon defended his position by saying he has “never neglected Honam,” and that any characterizations of him as having neglected the Honam region “deny his entire life’s work.”

The interim leader of the Minjoo Party Kim Chong-in gave tacit support to the former chairman’s excursion to Gwangju.

“Moon told me when he came asking me to step up as interim leader of the Minjoo Party that the party will have to win the support of 8.6 million voters in Honam to win a majority in the election,” Kim said Thursday while holding an election campaign in Ilsan, Goyang. “The effects will depend on how much the Gwangju voters decide to embrace the party.”

Moon was surrounded by some 300 supporters when he gave the speech in Chungjang-ro. After his speech, it took him more than 10 minutes to make his way down a 70-meter (229-foot) road packed with supporters asking for autographs and photos.

When a reporter asked him if he expected a similar welcoming in Gwangju, he replied, “No, I know that there are citizens out there who are not satisfied with me and the party. I am here to apologize and promise that we will be doing our best.”

Some citizens Moon met after paying his respects at the May 18th National Cemetery yelled “Why are you here?” and “How could you think of coming here!” One 78-year-old man scolded Moon, telling him to apologize on his knees.

The minor opposition People’s Party co-chairman, Ahn Cheol-soo, did not make further comments on Moon’s excursion other than to say, “The citizens of Gwangju will decide.” Early voting before the elections kicked off Friday and lasts through Saturday.