Giants catcher keeps up with the bold displays

Giants catcher keeps up with the bold displays 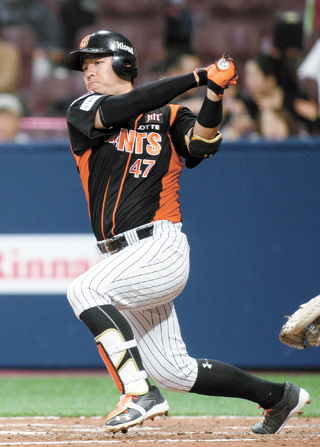 Lotte Giants catcher Kang Min-ho is an invaluable asset for the team in both offense and defense, so management wants to keep him healthy and uninjured.

That’s not easy, considering both his position and tendency to make wild plays.

The 31-year-old’s most recent display was during the season opener against the Nexen Heroes on April 1 in Gocheok Sky Dome.

In the fourth inning when the game was tied 0-0, he slid into first base headfirst after grounding a single to left field. The hit went deep and Nexen’s infielders struggled to catch it, but Kang was so focused on not getting tagged out that he didn’t even notice what was happening.

Considering it was an opening game, such a gutsy play is unsurprising.

But Kang is the Giants’s starting catcher, which means he is responsible for leading the team’s defense and should be avoiding injuries at all costs.

Before the season started, Giants manager Jo Won-woo specifically demanded of the Giants catcher to play “the full season this year without any injury,” telling him that “things like batting average (BA) and home runs do not matter.”

Although it was a tenacious play that provided the Giants with a scoring opportunity, Kang laying himself out was a frightening sight for the coaching staff.

It seems though Kang is determined to be even bolder this year. This was evident during the spring camp when Kang was spotted fearlessly sliding into bases.

“Kang looks different this year,” said Heo Gu-yeon, a baseball commentator for MBC. “He is bold, especially when he’s on base. He steps far out from base to seek opportunities for stolen bases and this really bothers pitchers. Also, when he drives home, he often throws himself on the ground to slide into the base to decrease his chance of getting tagged out.”

Part of his bolder style is an attempt as team captain to get other players to work harder.

“The coaching staff of the Giants emphasize on the basics,” Kang said. “I believe that by going even further, I can set an example for my teammates.”

But Kang doesn’t see his April 1 play as particularly exceptional.

“I think any baseball player would have done the same in that situation,” Kang said.

“For me, I did what I did without even thinking. To be honest, it came out during our team meeting that we should try to avoid sliding into first base. It is crucial for us to prevent any possible injury early in the season when we are only starting. But I saw Jeong Hun sliding in the game the next day on April 2. Sometimes we just do things instinctively without even thinking.

“But managing our condition and preventing injury is the most critical task for us,” Kang added.

Kang was excluded from the first team roster by mid season last year due to a hamstring injury. He almost couldn’t make it to the All-Star game, either. His injury, however, did not stop Kang from having a decent season last year, hitting 118 pitches during 380 at-bats to record .311 BA. Kang’s also had 35 home runs and 86 runs batted in (RBI).

But, even with his impressive record last season, Kang feels he’s getting rusty. “I am definitely getting old,” he said at the end of last season.

But despite his age, Kang is still critical to his team’s success. He demonstrated this on April 9, when he drove a grand slam against Samsung Lions in the sixth inning. Kang had an impressive .750 BA and four RBIs in the game. Kang’s effort lifted the Giants over the Lions 7-4.

“A professional athlete should not shy away from making bold plays,” Kang said.

“However, having an injury-free season is also important. My physical condition is decent right now and so is the team. I won’t be a burden to the team by hurting myself.”