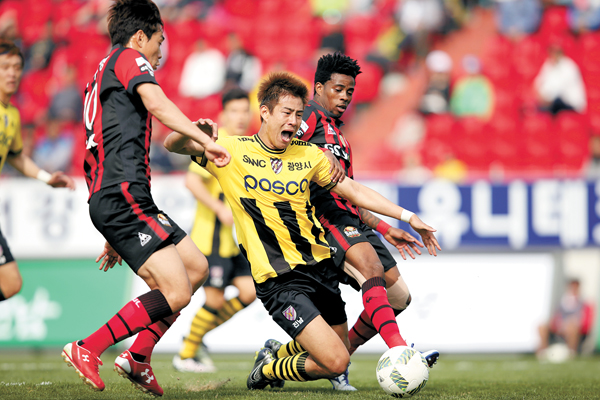 FC Seoul’s striker Carlos Adriano fights for the ball with Jeonnam Dragon’s defender Bang Dae-jong in the fourth round of K-League Classic matches yesterday. The Brazilian had one goal and one assist to lift Seoul over Jeonnam. [K-LEAGUE]

All twelve teams in the K-League Classic played over the weekend in an exciting fourth round of regular season games.

Suwon FC and Sangju Sangmu FC played to a 1-1 draw on Saturday, and while Suwon heaved a sigh of relief afterwards, Sangju left feeling frustrated.

The two teams were promoted from the second division K-League Challenge just before the season but they’ve had very different experiences ever since. Suwon has stayed in the top five of the league standings while Sangju has lingered at the bottom.

Sangju grabbed the lead in the first half after scoring in the 27th minute when Korea Armed Forces Athletic Corps forward Park Jun-tae netted the ball off a pass by midfielder Hwang Il-su inside the penalty box. Hwang received a lobbed pass from behind at the right corner of the box and poked the ball in to find Park rushing into the center of the penalty box.

After Sangju got the early lead, Suwon continued to challenge but was unable to find success. But in the injury time after the second half, just when Sangju thought it had secured its second K-League Classic win, Lee Seung-hyun managed to find the net. This meant Sangju failed to grab a second win in the first division while Suwon managed to remain undefeated.

For the bottom-ranked Incheon United FC, its 2-3 loss to Seongnam FC on Saturday was yet another painful experience. Initially, Seongnam’s Hwang Ui-jo gave his team an early boost by scoring two back-to-back goals in the fifth minute and 21st minute. However, Incheon equalized the game in the 42nd minute and again in the 65th minute. But Incheon’s comeback attempt was halted two minutes after it equalized the match when Seongnam’s Tiago Alves Sales De Lima scored the game winner.

For the game between Ulsan Hyundai FC and Gwangju FC on Saturday, Ulsan edged Gwangju 2-0 to stay in the top pool of the league standings. Center-back Kim Chi-gon scored the opener for Ulsan in the 26th minute by nailing in the loose ball during Ulsan’s free kick attempt. After Kim’s goal, Lee Jeong-hyeop added another point for Ulsan in the 50th minute by striking the ball past the goalie from the top of the penalty box. Despite Gwangju’s relentless attempt to catch up, Ulsan’s defense successfully shut down Gwangju’s offense to emerge victorious.

On Sunday, K-League Classic rivals Jeonbuk Hyundai Motors and FC Seoul had different results. While Lee Dong-gook’s volley in the 58th minute was insufficient for defending champ Jeonbuk to overcome the Pohang Steelers in a 1-1 draw match, combined effort by Lee Seok-hyun and Carlos Adriano was enough to lift Seoul over Jeonnam Dragons FC 2-1.

Finally, the game between Jeju United FC and Suwon Samsung Bluewings was a spectacle. Above all else, it was the debut match for former national team star striker Lee Keun-ho who joined Jeju early in the season, but the game itself was also a thriller. The two teams went scoreless until the 73rd minute when the Bluewings’ Kwon Chang-hoon broke the silence. The two then piled in three goals from 84th minute to 87th minute to eventually tie the game 2-2.