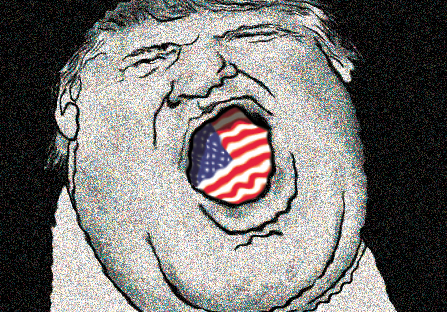 The transcendental phenomenon of Donald Trump has reached Wisconsin. German current affairs weekly magazine Der Spiegel described him as a human being with an intelligence of a fourth grader in elementary school. Major U.S. media first took his presidential bid as a joke. But the American dignity now has crumbled before the juggernaut named Trump, and the country’s civilization itself is under a serious threat.

Will the transcendental phenomenon of Trump stop in Wisconsin? Key players in the Republican Party and other Americans who are worried about the future of democracy in their country — as well as U.S. allies such as Korea, Japan and members of the NATO who are concerned about his reckless foreign policy remarks — want the phenomenon to end in the state of Wisconsin. But it is premature to jump to a conclusion. We must at least wait for the April 19 New York primary, which is allocated with 92 delegates. The primary in California, which has 169 delegates, is also approaching.

What is the origin of the Trump phenomenon? According to the author of his biography, Michael D’Antonio, Trump has not read a single volume of serious book since his college years. In Trump’s lavish penthouse in Manhattan, D’Antonio spotted no books at all. How was it possible that Trump, who has no cultural refinement at all, beat Jeb Bush, who hails from a powerful political dynasty in the early stages of the primaries, defeated Florida Senator Marco Rubio in his home state and nearly exhausted Cruz before reaching Wisconsin?

Prof. Sangki Kim from Southern Illinois University said the Trump phenomenon was a revolt by the lower class of the people. The interpretation by George Packer of The New Yorker is also similar. Packer pointed out that millions of the white working-class became poor during the 2008 financial crisis. Although the economy has revived since then, only the rich enjoyed the growth, and the wealth gap became wider than ever. Lower-class white people felt despair for being abandoned, and their sense of betrayal toward the government, major politicians and the rich only grew.

Packer said that since 2008, economic and moral collapse has gradually progressed in the United States. That crumbling deprived the United States of its traditional decency, tolerance toward immigrants and its prestige as a superpower. It is a sheer irony that poor white people are thrilled by a billionaire’s propaganda.

Trump has been exploiting the deepening dissatisfactions of the public as skillfully as Adolf Hitler. He doesn’t hesitate to issue racist and antagonistic remarks carefully scripted by Roger Stone, a veteran political strategist infamous for despicable propaganda campaigns.
Trump said he will raise a wall at the U.S.-Mexican border to stop drugs and illegal immigrants from entering the United States. Such statements are aplenty. He said families of terrorists will be executed. He said the Korean Peninsula is none of the American people’s business, vowing to withdraw U.S. troops from Korea and Japan. He stated that he will block Chinese products from entering the country by imposing high tariffs. He remarked that the members of the NATO will have to pay for defense expenses of Europe.

In a book titled “The Clintons’ War on Women,” Stone insisted that Chelsea Clinton is not a daughter of Bill Clinton and that Bill Clinton has a son from an affair with a black prostitute. Trump will surely attempt to take advantage of such claims if he faces Hillary Clinton in the November presidential election.

The Trump phenomenon is driving the U.S. political culture into a deep, dirty swamp, whether he gets the Republican ticket or not. Peter Wehner, deputy director of speech writing for former President George W. Bush, has deplored that the Republican Party is broken — and if Trump ever becomes the presidential nominee — the party will face a catastrophic end. It may be an exaggeration that the Republican Party will face an end, but a complete reform is unavoidable. American politics — maybe the entire American civilization, for that matter — needs serious soul searching.

Hopes are high that Wisconsin will be the final blockade to stop Trump’s mad running. Trump, who vowed to allow a nuclear-armed South Korea and Japan, is a poisonous and emotionally unstable person. It is unimaginable to think such a person will become the U.S. president.

It is North Korea’s young ruler Kim Jong-un who will most enthusiastically welcome the withdrawal of U.S. troops from South Korea and Japan, and the Korean Peninsula will become a ticking bomb. China will most likely take the lead of the Asia-Pacific order.

We seriously hope that Trump will not secure the 1,237 delegates needed for the ticket by July, and that instead a contested convention, produces a reasonable, alternate candidate.