Lawyers take realtors on over their commissions

Lawyers take realtors on over their commissions 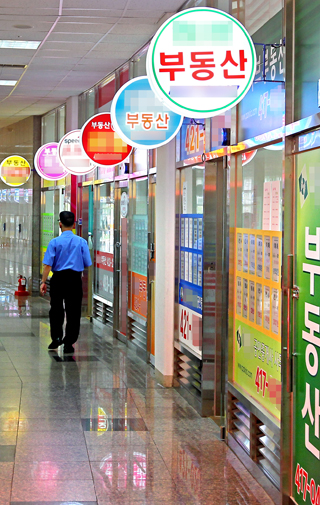 A man walks past an array of real estate agencies in Jamsil, southeastern Seoul. [JOONGANG ILBO]

Commissions charged by real estate brokers have become controversial after a group of lawyers offered a cheaper alternative house-hunting service.

Trust Lifestyle, a company created by four lawyers, started a real estate service in January and landed their first contract for a 100 million won ($86,670) jeonse (long-term deposit with minimum guarantee of two years) lease on a low-rise apartment in Yeoksam-dong, Gangnam on March 16.

The Korea Association of Realtors asked the police and the Gangnam District Office to investigate the matter. The Gangnam police turned the case over to the prosecutors’ office last week on grounds that the lawyers were engaging in the real estate business without a proper license.

At the center of the issue is the brokers’ commissions.

The lawyers said the most they would take for their services was 990,000 won regardless of the value of the property.

This is a bargain compared to the current commission charged by realtors. The realtors are particularly worried since the government last year changed regulations and cut the commissions in half to reduce costs for renters and buyers amid continuously rising jeonse prices caused by lack of supply.

For example when a realtor succeeds in brokering a 300 million won apartment, he gets 1.2 million won for their service. If the transaction is for 1 billion won, the commission is 9 million won.

People have been complaining about the expensive commissions charged by realtors.

“Because of the cost of a brokerage commission, I’m hesitant to buy an apartment,” said a 47 year-old resident of Sadang-dong, Seoul, who requested anonymity.

Competition in the market is already intense as there are over 90,000 certified realtors and the real estate market in recent years has been unstable.

The situation facing lawyers these days isn’t too promising either. While demand is flat, the industry is flooded with lawyers since the government adopted a law school system. Last year registered lawyers numbered 20,531, a 24 percent increase compared to two years ago. When comparing to 2006, the number of lawyers has more than doubled from 8,418.

“Every time I changed residences, I wondered why I had to pay this much money for this level of service,” said Gong Seung-base, a founding member and CEO of Trust Lifestyle.

The decision on whether lawyers brokering real estate is legal is now in hand of the legal authorities. Depending on the final outcome, the future of real estate brokers could be determined.

“Since the appearance of low-charge services whose foundations are based on online platforms, several industries like taxi services are undergoing a lot of hard disruptions,” said Kwon Dae-joon, a real estate professor at Myongji University. “The real estate industry is now faced with winds of changes.”

Experts say there will be growing pressure to lower the real estate brokerage commission since brokerage costs are going down due to the use of technologies including the Internet.