For star Yoo Ah-in, it’s lonely at the top

For star Yoo Ah-in, it’s lonely at the top 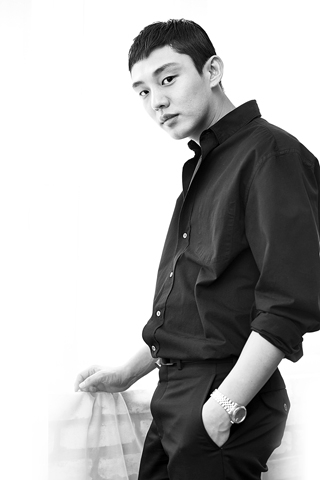 Many know Lee as brutal man who killed his brothers to win the throne, but in the SBS drama “Six Flying Dragons,” which ended last month, Yoo tried to show Lee as a passionate man who gets angry at corrupt politicians at the end of the Goryeo Dynasty (918-1392) and dreams of establishing new country for the people.

Although some cheered for the new portrayal of the historic figure, while others criticized Yoo for beautifying the character, Yoo says there cannot be just “one analysis” of a historic figure. He shared his views on how he studied the part and what he wanted to show.

Q. On what side of Lee did you focus on while acting?

A. The writers for the drama had written scripts as if they were viewing [history] from a different point of view. So I also tried to show some weak sides of Lee, very different from his brutal image. I think the weaker a person gets, the louder a person shouts. I thought Lee’s choices [to engage in brutal fights with others for power] were to hide his weakness, and acted accordingly.

Because there is one image many have about him, I had to debate how much to make my portrayal of Lee different from any other Lee [that other actors have played], so that the audience wouldn’t be too negative about the new analysis of the figure.

How do you see Lee now?

There cannot be just one analysis of a historical figure. Any person cannot be judged to be good or bad and no one, even the historical character himself, knows exactly what a person is like. I just wanted to show a variety of characteristics Lee had through small motions, tones of his speech, and facial expressions over the run of 50 episodes.

You also express your opinions on political issues as well. Any reason why?

It’s been more than three years since I have starting expressing my ideas on social media networks. I have interests in the issues and I think I should. I think choosing what world you would live in and choosing who becomes politicians is as important as what college I will go to or what job I will have.

Don’t you also donate a lot to causes?

I think I need to be more impartial in living my life. What I earned isn’t entirely mine. Also, I think making a donation shouldn’t be kept hush-hush, but should be made as loud as possible. When someone does something cool, others may start to think they want to imitate and do the same.

How do you review your performance as an actor in the past year? You have been in the movies “Veteran” and “The Throne” and then this drama.

I think many moments I have never thought would come, or many things I have dreamt of as an actor, have come true. I have felt a sense of accomplishment but I also have much homework to do. Many might be mistaken that I only love to do strong characters based on the recent roles I have played, but these characters are not what I do best.

Aren’t you jealous about your colleague Song Joong-ki, star of “Descendants of the Sun,” becoming so popular?

I just went to the Asia Film Awards [held in Hong Kong] recently, and eight out of 10 questions during the press conference were related to the drama he’s doing. It was hard for me to look calm when I was so disappointed (laughs). I’m happy for him and at the same time envious.

What’s on your mind these days?

Just like Lee’s line in the drama, every day I feel scared, every day I’m excited and every day I’m lonely. There are some similarities one may find between one with political power and an actor.