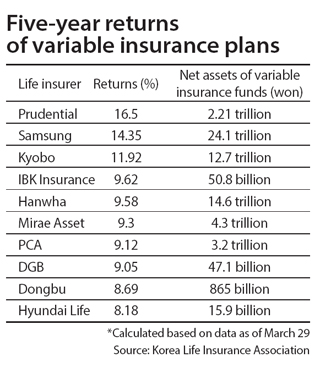 Thanks to the unprecedentedly low borrowing rates, variable insurance plans that were once ditched by consumers several years ago are getting renewed attention.

Kyobo Life Insurance, the third largest in the market, launched Kyobo Hybrid Variable Whole Life Insurance on April 1. The main advantage of the new plan, compared to similar ones in the past, is that the risk of losing money is now lower, the company claims. If the insurer does poorly on investment returns, the new variable plan guarantees the holders’ principal - the whole premiums - if they covert the plan to a regular whole life plan as they near retirement.

The Seoul branch of Allianz Life introduced a variable plan designed for enhanced profitability on the same day as Kyobo. The new product invests holders’ premiums in high-risk high-return funds.

Prudential Life Insurance came up with a similar plan last month, whose sales broke 10 billion won ($8.7 million) in just four weeks. It is an annuity plan making monthly payments for subscribers, similar to a pension, regardless of investment returns.

According to statistics by the Korea Insurance Development Institute, the total for first-time premiums of new variable insurance plans between January and November of 2015 hit 1.211 trillion won, up 15 percent from the same period in 2014. The figure was as high as 2.49 trillion won in 2010, but plunged to 1 trillion won in 2013.

Even from the perspectives of consumers, variable plans have become much more attractive these days. Insurance firms have lowered their interest rates for savings insurance plans. The KIDI rates are slightly over 2 percent, while the minimum guaranteed rate has fallen to 1 percent. Because of such meager rates, consumers have turned to riskier variable plans.

“As operation costs for variable insurance plans have become less costly, due to competition from insurers, consumers can take advantage of that,” said Cho Young-hyun, a researcher at the KIDI.

Insurers had to pay 20 to 25 percent of premiums as operation costs for variable plans in mid-2000. Due to such excessive costs, rumors circulated that it was impossible to take back the principal even after 10 years. For the first seven years after subscription, the average cost rate is between 10 and 13 percent of premiums. The percentage slightly goes down to 5 to 10 percent in the eighth to 10th year. Variable plans offered by online insurance firms cost 3 percent in the early subscription years.

Because of the costs, variable insurance plans are need to be held for a long period of time. Consumers face bigger losses if they cancel the plans early. Financial planners advise subscribers to hold such plans for more than 10 years, citing the non-taxation advantage.

When counting returns of variable plans, it makes more sense to look at returns in the long run. According to a comparison of five-year returns of variable plans by local insurance firms, compiled by Korea Life Insurance Association, Prudential showed the highest returns, at 16.5 percent, followed by Samsung Life and Kyobo Life. Some firms that heavily invested in emerging economies and commodities ended up with lower returns. Funds related to oil and Brazil or Russia had minus 20 to 40 percent in returns.