Issuances of equity-linked securities take a tumble in Q1

Issuances of equity-linked securities take a tumble in Q1 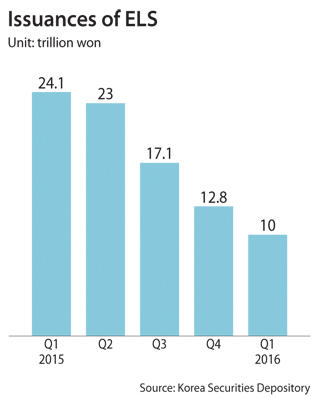 Issuances of equity linked securities (ELS) halved in the first quarter of the year after massive losses in the Chinese market affected demand.

According to the Korea Securities Depository on Friday the local brokerage industry issued 10 trillion won ($8.6 billion) worth of ELS in the first three months of the year. This is a 58.5 percent drop compared to the same period last year when 24.1 trillion won worth of ELS were issued.

“Issuances of ELS have been shrinking since the third quarter of last year as investors have suffered from several negative factors that started with China’s stock market fall in June and the declining Hong Kong’s Hang Seng China Enterprise Index,” said an official at the depository.

In fact, Mirae Asset Group Chairman Park Hyeon-joo reportedly told the management of Daewoo Securities, which it recently acquired, to reduce its marketing of ELS and focus more on raising investment in Vietnamese equities.

Park was said to have stressed the risks of ELS investment, adding that it becomes a problem once every decade and that Daewoo Securities had invested too much.

However, the situation seems to be turning around largely thanks to diverse new ELS products, some of which lowered the principal investment losses. March alone saw a 4.22 trillion won in ELS issuances.

In fact, ELS products that partially guarantee the principal investments accounted for 74.3 percent of those newly issued in the first quarter, totaling 7.43 trillion won.