How to navigate around the cheapest airfares

How to navigate around the cheapest airfares 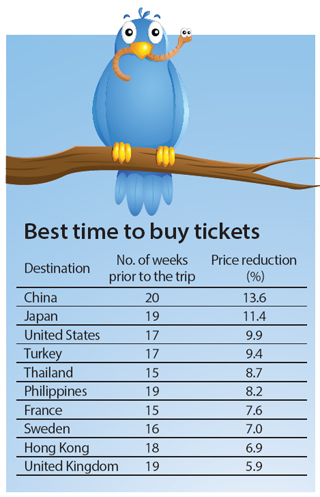 Why pay more when the price of an air ticket may fall?

As summer holidays approach, so-called flight ticket tech - how to get tickets at a cheaper price online or through mobile apps - is a hot topic of discussion among people hoping to get away.

The easiest way to score cheaper tickets is to make use of air carriers’ special promotion seasons. Discount events are held mostly by low cost carriers (LCCs) to improve their brand awareness. The largest domestic LCC, Jeju Air, offered tickets at up to a 96 percent discount in a recent promotion. Korean Air’s low cost subsidiary Jin Air also cut its fares up to 84 percent during a recent promotion period.

Impacted by those heavy discounts from LCCs, other carriers also came up with attractive promotions. The nation’s No. 2 carrier, Asiana Airlines, sold round-trip tickets to Southeast Asian countries at less than half the original fare in February. Middle Eastern airlines also offered discount promotions.

The best way to take advantage of these promotions is to be aware of them. If you go to airlines websites you can sign up for regular emails describing promotions.

Another way to ink the best flight ticket deal is to benefit from codeshare agreements, which refers to two or more airliners sharing a flight.

Airfares offered by national flag carriers are usually more expensive for its nationals compared to foreign air carriers. You can take advantage of the price gap for the best ticket deal.

For example, if Korean Air and Air France are in a codeshare agreement for a flight bound for Paris from Incheon International Airport, customers should buy tickets from Air France, not Korean Air.

You can check each carrier’s homepage to find out about codeshare agreements. Search functions for flight schedules operated in codeshares is also available online.

People can also check special sites with data from all air carriers including LCCs. The cheapest offers can be seen all at once through these websites. One such site is Skyscanner.

According to data by global travel search site Skyscanner from the past three years, the best timing for plane ticket purchase is about 19 weeks prior to an actual departure date. Planning that far ahead can save up to 8 percent of the ticket cost on average, the company said.

A ticket to China - last year’s favorite destination for Korean tourists - is 13.6 percent cheaper when purchased 20 weeks prior to departure, while for Japan, buying a ticket 19 weeks before departure could save customers 11.4 percent. For the United States, tickets bought 17 weeks prior to travel come 9.9 percent cheaper.