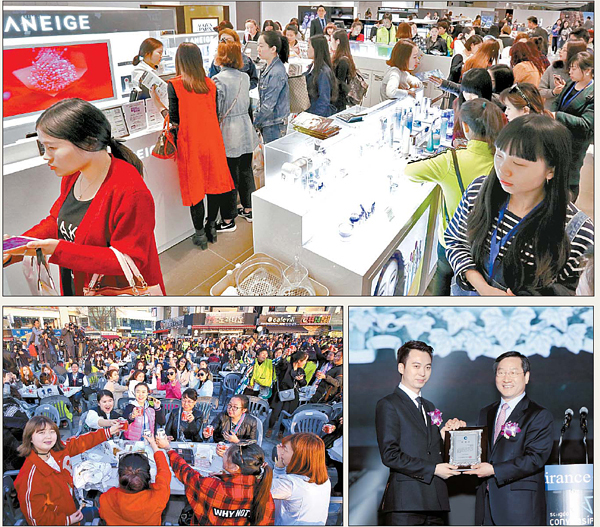 Over 5,000 Chinese shoppers flooded into Seoul’s downtown duty-free shops as a part of the largest-ever single group tour to Korea last weekend.

Several hours after the visit by the workers of China’s Aurance Group on a corporate incentive tour, many cosmetics were out of stock, indicating the spending power of the tour.

“All 11 colors of the latest lipstick products, sleeping packs and other skin care products sold out even though we doubled our inventory before their visit,” said Oh Kyung-eun, a sales manager at AmorePacific’s Laneige brand, in Galleria Duty Free 63 in Yeouido, western Seoul.

“Daily sales increased 300 percent between April 1 and 2 compared to the previous week,” the manager said.

Galleria Duty Free 63, one of the stores that catered to the group, said the visit helped it see the highest daily sales since its opening. Sales on April 1 and 2 were double the daily average in March.

Shilla I’Park Duty Free, the other shop that catered to the group, saw sales rise by 230 percent compared to its daily average.

The shopping session was the last activity enjoyed by the staff of the Chinese beauty company, who had already visited Incheon to hold a company meeting and do some sightseeing.

The Incheon Metropolitan City Government helped organize the group tour after the Guangzhou -based company and the city government signed an agreement to hold company trips to the city for the next three years.

That was welcome news for struggling Korean retailers, who quickly began to vie for the rights to host the group.

Many of the purchases by Aurance workers, who are mostly women in their 30s and 40s, were inspired by the hit K-drama “Descendents of the Sun.”

Products promoted on the series or items that featured lead characters as models were high on the shopping lists of many Chinese visitors.

Cosmetic brand Laneige benefited from having chosen Song Hye-gyo, a female lead in “Descendents of the Sun,” as one of its main models.

The brand had to limit the number of the products each person could buy because demand was so high, according to the manager of the beauty label.

The Cheong Kwan Jang store at Galleria Duty Free sought to tap into the drama’s popularity by displaying pamphlets featuring Song Joong-ki, one of the male leads, holding the extract.

Some of the group with deeper pockets also shopped at upscale watch and jewelry brands, which have been struggling recently because of the slowing domestic economy.

Shilla I’Park Duty Free noted that of all product categories, watches and jewelry enjoyed the highest sales growth at 370 percent.

Galleria noted that some travelers bought luxury timepieces that cost more than $10,000.

“One man in his 30s from the tour group bought a watch, the Luminor GMT Ceramica, that costs $13,000,” said a sales manager of luxury watch brand Panerai.

Of the international travelers, Chinese tourists spend the most money abroad, according to the United Nations World Tourism Organization. They spent a record $165 billion abroad in 2014, an increase of 27 percent since 2013, becoming the unrivaled No.1 ahead of the United States and Germany. In 2015, their spending further increased to $229 billion, and the number of outbound tourists reached 109 million, according to research company GfK.

The scale of spending by Chinese shoppers has prompted duty-free outlets and retailers to devise marketing strategies that focus on them.

As more companies in China and Asia more broadly are traveling to Korea for corporate workshop and holiday trips, retailers are gearing up to meet their needs.

The Seoul Metropolitan Government and Korea Tourism Organization announced last week an even larger group tour than this most recent one.

They said that from May 5-13, 8,000 employees of the Nanjing Zhongmai Science and Technology Development Company will be visiting Seoul on an incentive tour.

Some 1,000 employees of Prudential in Singapore are scheduled to visit Seoul on April 12 to take a tour themed around K-pop.

Besides duty-free shops, restaurant franchises are expected to put out all the stops to court the group after watching several chicken franchises score massive sales during a fried-chicken-and-beer, or chimaek, event on Wolmido in Incheon on March 28.

The Incheon city government contacted 50 chicken stores and franchises near the location to host the event, where the 4,500 Aurance workers that showed up consumed 3,000 fried chickens and 4,500 cans of beer.

The series of group tours are part of city governments’ efforts to boost local tourism through the MICE (meetings, incentives, conventions and exhibitions) initiative.

The initiative is designed to support tours by facilitating company meetings at convention centers.