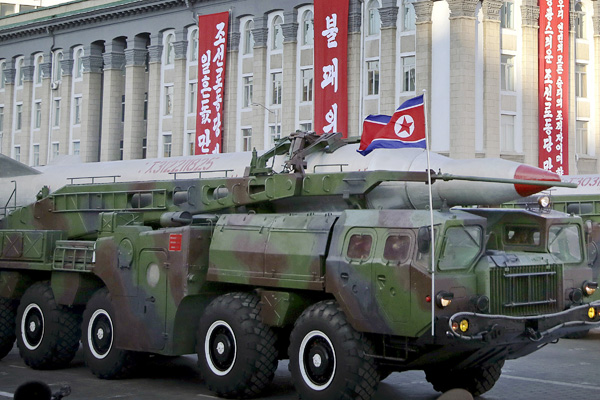 In this photo released in October 2015, what is believed to be an improved version of the KN-08 intercontinental ballistic missile is paraded in Pyongyang. [AP /NEWSIS]

North Korea’s latest belligerent declaration - that it successfully tested a new long-range rocket engine that could allow nuclear strikes on the U.S. mainland - leaves outsiders in a familiar predicament.

With only a few details and no independent confirmation of what happened, there’s the usual skepticism. But if even only part of the long list of nuclear and missile work that the North has boasted of successfully completing since its fourth nuclear test in January is true, Pyongyang would seem to be barreling ahead toward its goal of nuclear-armed long-range missiles.

The problem, as always, is that nothing has come close to checking North Korea’s advance. International nuclear disarmament talks have been stalled for years, and round after round of tough U.N. sanctions have done little to halt the North’s nuclear tests and long-range rocket launches, both of which are crucial to developing a nuclear missile arsenal.

North Korea has also threatened pre-emptive nuclear strikes against Washington and Seoul and fired short-range missiles and artillery into the sea.

In Washington, State Department spokesman Mark Toner called on North Korea to “refrain from actions and rhetoric that further destabilize the region and focus instead on taking concrete steps toward fulfilling its commitments and international obligations.”